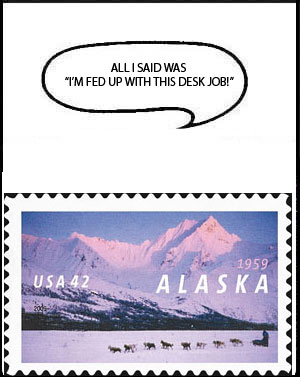 A reader suggesting the thoughts of an unhappy postal employee wins the philatelic part of the May cartoon caption contest. The featured stamp was the 42¢ Alaska Statehood stamp issued this year. The next contest will be in Linn's by July 6.

Alaska Gov. Sarah Palin may be a memory on the national scene, but she is surely not forgotten.

Her run for the vice presidency in 2008 and her statements during the campaign inspired many entries in the May cartoon caption contest using the 2009 42¢ Alaska Statehood stamp in Figure 3.

For his entry, Bennett Bradford of Vineland, N.J., follows up on an oft-quoted line from Palin impersonator Tina Fey on TV's Saturday Night Live: "Look – you can see Russia from here; we're almost to Sarah Palin's place."

Taking a totally different tack, Lawrence Segel of Valhalla, N.Y., weighed in with "With scenery like this, why would Sarah Palin want to move to Washington, D.C.?"

There were half a dozen versions of a classic line applicable to many different teams of animals, be they dogs, horses, mules or elephants in train: "If you're not the lead dog, the scenery never changes." This version was offered by Steven Cate of Santa Ana, Calif.

The word mush, urging the dogs on to greater speed, formed the basis of a good number of entries, but it has another meaning, as used by Phil Echandi of Omaha, Neb.: "Mush? Not again! We had mush last night!"

In my professional travels, there were very few places I visited that did not have a McDonald's fast food restaurant. Probably the first that I found was Bujumbura, Burundi.

The Alaskan scene on the stamp could not be more different than central Africa, but this entry from Terry Jordan of Potomac Falls, Va., seems as surprising as finding a McDonald's in Bujumbura would have been: "I can see those golden arches just ahead! Yum!"

With his comic nonphilatelic line, Jordan is the winner of this week's cartoon caption contest.

He will receive Linn's U.S. Stamp Facts 19th Century published by Amos Hobby Publishing, or a 13-week subscription to Linn's (a new subscription or an extension). The book has a retail value of $14.95.

On the philatelic side, the winner, who didn't provide his name, posits that the sled driver is a postal employee who is thinking "All I said was 'I'm fed up with this desk job!'"

"Whoooooa! We forgot the mail bag! Stop!" from Ron Aljoe of Lewisville, Texas.

"Rain, gloom of night, . . . I can handle that. But what about snow blindness?" by John Kachmarik of Rossford, Ohio.

"Mush, you huskies. The Pony Express rider is gaining on us," sent by William MacQuarrie of Omaha, Neb.

"Wrong way! Is this the Idiot-rod?" from Ramon Rodriguez in Las Vegas, Nev.

"What did you expect on a ‘See Alaska on $20 a day' trip?" from Raymond Smith of Springfield, Mo.

"I hope we don't hit bad weather. I have a date with a Russian wolfhound in Nome," was sent by Oger Wullen of Woodside, N.Y.

The next cartoon caption contest will be announced in the July 6 Linn's.