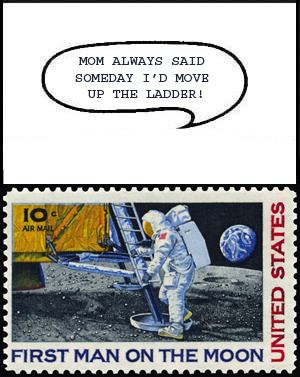 Harry Miller Jr. from Summit Hill, PA., is the winner of the philatelic line portion of the April cartoon caption contest, featuring the 1969 10¢ First Man on the Moon airmail stamp. The next contest will be in Linn's by June 7, 2010 issue.

There must be a lot of dog owners among U.S. Notes readers, as one thought dominated the entries in the April cartoon caption contest that featured the 1969 10¢ First Man on the Moon stamp shown in Figure 4.

As an example: "Whoa! What did I just step in?" This line came from Tim Liljeberg of Brooklyn Park, Minn.

Well behind, but with a loyal following, was the Buzz Aldrin appearance earlier this year on the ABC television showDancing With The Stars. Though not the winner, Aldrin did prove himself to be a man of many talents. Marvel Houge of Estherville, Ind., managed to translate that event to a contemporary line with "Come on moon boots, let's dance with the stars!"

A dedicated group of commentators on postage costs weighed in with observations, the best of the lot being this entry from Tom McCormack of Cortlandt Manor, N.Y.: "In 40 years, postage rates will be out of this world!"

The nonphilatelic line winner, shown in Figure 4, marries mom's ever rosy predictions for our future with the equipment on the lunar lander. It comes from Harry Miller Jr. of Summit Hill, Pa.

On the philatelic side, Paul Carvalho of Lexington, Mass., notes the difficulty of making the cut to get on a postage stamp with "Golly! What a guy has to do to get himself on a postage stamp!" The speaker is right, of course. It is not enough to be great to get on a stamp. One must be a stand out from among all of those who have achieved fame.

"People seem to act crazy when there's a full Earth!" by Michael Intenzo of Philadelphia, Pa.

"So that's where the Ice House cover has been all this time!" from Shirley Gallagher of Mason, Ohio.

"Tell mission control, so much for the crater theory, it's really Swiss cheese." by Gordon Dekarz of Stockton, Calif.

"What the heck? Is that a FedEx truck over there?" by Cary Brick of Clayton, N.Y.

"I knew being new at the post office would get me a rural route, but this is ridiculous!" sent in by Bill Hanks from Mesa, Ariz.

"What will the wife say if I get this dust on the carpets?" from John Oliver of Mount Laurel, N.J.

The next cartoon caption contest will be announced in the June 7 Linn's.