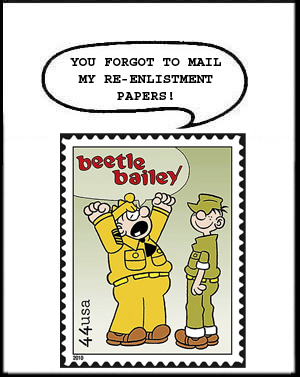 Kell Ling III of Statesboro, Ga., submitted this caption for the 44¢ Beetle Bailey. The next contest will be announced in Linn's October 11 issue.

How many readers can identify the first name of Sargent Snorkel, one of the two characters shown on the 44¢ Beetle Bailey stamp?

The stamp, from this year's Sunday Funnies set, is pictured in Figure 2.

In the comic strip, the character is often simply referred to as Sarge.

I'll tell you his first name at the end of this column. The other character on the stamp is Beetle himself.

This stamp was the cartoon caption contest stamp for August.

I asked readers to come up with a cartoon line for Beetle, but many entries provided lines for Sarge instead. I feel bound to pick the winners from those who followed the directions, but some of the other entries are funny and will be included among the runners-up.

When he isn't inflicting his own brand of discipline on Beetle, Sargent Snorkel is usually eating, or thinking about eating, as is amply proven by his girth. He has a special fondness for the cookies that Beetle's mother often sends her son. So it is no surprise that readers used that as a major theme.

One of those, I thought, captured the characters especially well: "If I have to ask you one more time where you hid those cookies from your mother, you're in big trouble," sent by Thomas Misiewicz of Martinsburg, W.Va.

The comic strip Beetle Bailey began in 1950, so among the contest entries there was a good deal of comparison of then-and-now postal rates.

John Pearson of Boyertown, Pa., gets a nod here with "44¢ to mail a letter! When you joined the Army it was only 3¢."

There were a lot of "You forgot to..." lines, but one of them goes so well with Beetle's smile that it claims the prize as the nonphilatelic line winner, shown in Figure 2. It was sent by Kell Long III of Statesboro, Ga.

On the philatelic side, Joseph Timko of Vicksburg, Mich., refers to Sarge's habit of using his fists to punish Beetle's ingrained lethargy with this winning line: "You can't lick me any more. I'm self-adhesive."

"Gosh, Sarge! I didn't think you'd mind when I let Otto lick the tray to help while I was on KP," by William Mac Quarrie of Omaha, Neb.

"I give up. Which hand has the M&Ms?" from Steve Kotler of San Francisco, Calif.

"Beetle, I said 'No more leave,' not 'starch my sleeves,'" sent by Bill Hanks of Mesa, Ariz.

"Somebody's been licking my stamps!" by the Bishops of Tyler, Texas.

"Okay — your autograph for a three-day pass," by Steve Zarko of Lewisburg, W.Va.

"How many times do I have to tell you, 'Use ZIP code on your mail?'" sent in by Ron Cullers of Peru, Ind.

The next cartoon caption contest will be announced in the Oct. 11 Linn's.

And as promised earlier, here's the answer: Sargent Snorkel's first name is Orville.