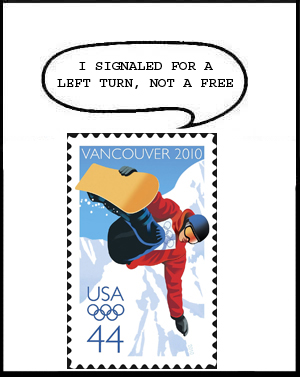 John Burns of San Antonio, Texas, is the winner of the philatelic line portion of the February cartoon caption contest, featuring the 44¢ Olympic Winter Games. The next contest will be in Linn's by April 5, 2010 issue.

The 2010 Olympic Winter Games are now a memory, but there were lots of great performances. Few were more likely to set the viewer on edge than the snowboarding acrobatics, as portrayed on the new 44¢ Olympic Winter Games stamp shown in Figure 3. That stamp was issued to honor the 2010 games held in Vancouver, British Columbia, Canada.

This 44¢ stamp was used for the cartoon caption contest for February.

Several entries wondered how the snowboarder keeps his orientation to the ground in the midst of triple twists and double backflips. This was nicely captured by Bennett Bardfeld of Vineland, N.J., who has the snowboarder asking "Which way is down?"

Though it would probably terrify most normal mortals, the objective is to attain maximum height for the aerial tricks, and this inspired several readers to suggest another piece of equipment.

"I hope they packed the parachute better than the last time!" is the example sent in by Russ Rego of Kaysville, Utah.

From the standpoint of those fearless folks who thought they might actually enjoy this activity comes this entry from Herb Roberts of Brooklyn, N.Y.: "So far I've got the best postal route around here!"

Critics of the U.S. Postal Service found little inspiration in this Olympics stamp, but many cast the athlete on the board in the role of a postman delivering the mail. Among these is the philatelic line winner, from a person who chose not to identify himself, but who has the figure saying, "Darn, dropped my mailbag again!"

On the nonphilatelic side, John Burns of San Antonio, Texas, wins the prize with his line shown in Figure 3.

"I wish I had one of those easy routes where you only worry about dog bites," by Ivan Pfalser of Caney, Kan.

"Bottoms Up!" sent in by Loretta Lincicome of Zanesville, Ohio.

"Could I be the first 'socked on the tush' stamp?" by Bradley Miller of Huntsville, Ala.

The next cartoon caption contest will be announced in the April 5 Linn's.