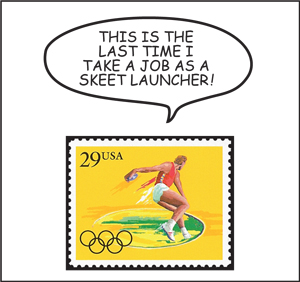 Steve Kotler of San Francisco submitted this winning line in the June cartoon caption contest, using the 29¢ Discus Thrower stamp. The next contest will be announced in Linn's Aug. 2 issue.

We've all seen the cute photos and videos of dogs jumping several feet into the air to catch flying disk toys. The June cartoon caption contest stamp in Figure 2 features the 29¢ Discus Thrower from the 1991 issue which promoted the upcoming 1992 Summer Olympics, and the stamp design seems to have brought those same dog-and-disk images to mind for several readers.

For example, Bill Hanks of Mesa, Ariz., has the discus thrower saying: "Wait 'til that barking dog tries to catch this!"

As a word, discus can be subsumed into other words, and the second most popular theme among this month's entries did this — most using the word discussion.

But this example from Mal Stock of Lincoln, Calif., stood out: "My last toss was discus-ting."

I hate to keep picking on the Postal Service, as they really do a good job of delivering the mail, but the entry from Dennis Miles of Tuscaloosa, Ala., captures this month's philatelic line prize by casting the athlete in the role of a wayward mail-sorting clerk: "Here at the post office, 'Fragile' means ‘Throw it underhanded.'"

The imaginative nonphilatelic line winner for this month comes from Steve Kotler of San Francisco, Calif., and is shown in Figure 2.

"I sure hope this doesn't come back Return to Sender" by Cary Brick of Clayton, N.Y.

"Let's see if I can throw this past the perforations this time," from David Swiger of Akron, Ohio.

"If you think this is easy, try staying in the circle, especially after a glass of wine!" from Lawrence Segel of Valhalla, N.Y.

"I wish buying a commemorative stamp was this easy!" by Wilmer Schimke of New London, Wis.

"I believe in really throwing myself into my work," from Scott Huffman of Dallas, Texas.

The next cartoon caption contest will be announced in the Aug. 2 Linn's.