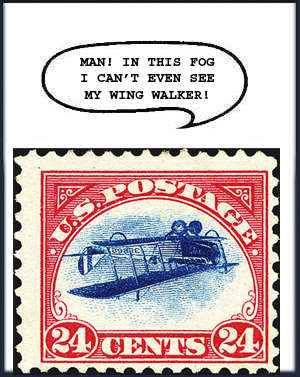 David Cheney of Columbus, Ohio, is the winner of the philatelic line portion of the May cartoon caption contest, featuring the 24¢ Jenny Invert airmail stamp. The next contest will be in Linn's by July 5, 2010 issue.

Thanks to U.S. Notes readers for a large group of highly entertaining entries for the May cartoon caption contest featuring the venerable 24¢ Curtiss Jenny Invert airmail stamp of 1918 (Scott C3a) shown in Figure 3.

More than half the entries had something, usually mail, falling out of the airplane — either by accident or on purpose. In the former category is this from R.H. Joy of Oxford, Conn.: "Nice, Orville — you just dumped the mail for Linn's cartoon contest!"

In the on-purpose category is "If I had a helper, I wouldn't have to fly upside down to drop the mail!" by Melvin Ellis of Herndon, Va.

Current events inspired this Icelandic volcano line from Chuck Ptacek of Hugo, Minn.: "I hope flying upside down helps to keep the ash out of my eyes so I can finish delivering the mail."

William Kriebel of Philadelphia, Pa., captures the philatelic line prize for this contest with "I really flip for this new airmail service!"

The nonphilatelic line winner for this month comes from David Cheney of Columbus, Ohio. It might take a second to register, but it becomes clear as you look at the inverted plane on the stamp.

"I didn't realize that flying down here in Australia would be so different!" by Jack Standen of Elyria, Ohio.

"I told you not to book our flight through your stamp dealer's web site," from T. Ryan of Peekskill, N.Y.

"I have the only known copy of Scott C3b; both the center and the frame are inverted!" from Michael Intenzo of Philadelphia, Pa.

"How are you enjoying the flight, Honey? Honey?! Honey!" sent by Tim Liljeberg from Brooklyn Park, Minn.

"Don't look now, but I think the pilot is unhinged!" from Steve Kotler of San Francisco, Calif.

"Darn, there goes my change for the next toll!" by M. Denis of Bridgeville, Ill.

The next cartoon caption contest will be announced in the July 5 Linn's.