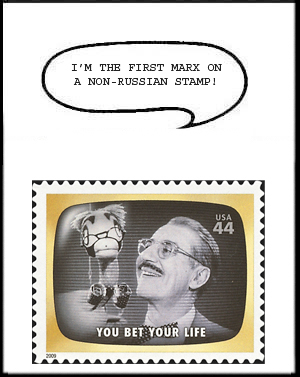 Gus Spector of Pennsylvania won the November cartoon caption contest. The next contest will be announced in Linn's January 10, 2011 issue.

The 44¢ Early TV Memories issue of 2009 is one of my personal favorites, as I grew up with many of the featured programs as daily or weekly fare. Indeed, my own television debut was as a member of the peanut gallery on the Howdy Doody show. My father, then an executive with the Voice of America, knew the producer of the show, and that got me my big network break.

But it was the 44¢ You Bet Your Life stamp in Figure 2, featuring Groucho Marx, that was selected as the cartoon caption contest stamp for November. The popular quiz show ran on TV throughout the 1950s with Marx as its host.

There were several common themes in the entries received from Linn's readers. The favorite was to marry the star's first name with the frustration collectors feel over the inability to soak off many modern U.S. stamps from the envelopes they were stuck on.

Richard Smith of Wilmington, Del., captured this with "It's true. They started calling me Groucho when I was trying to soak off self-adhesive stamps."

The next most used approach played off the possibility of a contestant saying the secret word chosen for each show.

As an episode of You Bet Your Life show began, the duck shown on the stamp would descend from the rafters bearing a word printed out on a placard. Groucho would note that if a contestant said the secret word, they would win $100.

Readers suggested that the secret word ought to be philately, rate increase, Linn's, or post office. A biting entry from Steven Cate of Santa Ana, Calif., is "The secret word, Mr. Potter, is deficit!"

Other readers suggested prizes other than the $100 for saying the secret word, such as a subscription to Linn's, being honored on a stamp, and a lifetime supply of forever stamps.

Though the claim made in Figure 2 is not entirely accurate, the entry shown from Gus Spector of Phoenixville, Pa., is amusing nonetheless, and is the contest's philatelic line winner.

On the nonphilatelic side, Ted Feldstein of Doylestown, Pa., takes the prize with this double entendre, as Groucho might have said it: "Cancel me? Why that's the most ridiculous thing I've ever heard!"

"My first job as a cowboy was a failure. No one would hire 'Groucho the Gaucho!'" by Steve Kotler from San Francisco, Calif.

"$15 for a duck stamp in color? That's the most ridiculous thing I've ever heard!" from Glen Norman of Fremont, Calif.

"Would I look better in high def? You bet your life!" sent by Steve Zarko of Lewisburg, W.Va.

"I would never collect a postage stamp featuring me as its subject!" by Scott Huffman from Dallas, Texas.

"Get away from me – it's duck season!" sent in by Tim Liljeberg of Brooklyn Park, Minn.

The next cartoon caption contest will be announced in the Jan. 10, 2011, Linn's.