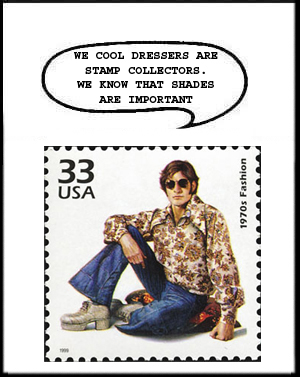 Charles Wales of Ashburn, VA., won the philatelic-line portion of the cartoon cpation contest. The next contest will be announced in Linn's November 8 issue.

A number of philosophers responded to the cartoon caption contest for September that featured the 33¢ 1970s Fashion stamp from the Celebrate the Century series (Scott 3189).

The captions overwhelmingly suggest that some of today's fashions – the backward baseball cap, the low-rider jeans, the baggy basketball shorts – will look as ridiculous in 50 years as the outfit on the stamp shown in Figure 4.

Perhaps best summing up the comments on the outfit in the stamp design is this rather direct entry from William Fletcher of McKinney, Texas: "No, this is not a clown outfit, and no, my name is not Bozo!"

Why is the model sitting on the floor in the stamp design? Several entries suggest reasons why the model could not get up, including a broken platform shoe and being stuck in the 1970s. But the one that connected best with today is "I've fallen on a sheet of self-adhesive stamps, and I can't get up!" from Steve Kotler of San Francisco, Calif.

In the winner's circle for philatelic lines was the Figure 4 entry, which plays on both the outfit and stamp collecting. It is from Charles Wales of Ashburn, Va.

The nonphilatelic line winner comes from Tim Liljeberg of Brooklyn Park, Minn., who connected the outfit to mailing delays with, "I ordered these clothes in 1970, and they just arrived. I should have used Priority Mail!"

"If all U.S. stamps were as 'pretty' as me, I would buy a lot more of them," by Lawrence Segel of Valhalla, N.Y.

"Yo, there. My shirt is a postage stamp from Tonga," from Larry Snyder of Lewisburg, Ohio.

"I just completed a course in CB radio installation. I've got a career that will last a lifetime!" sent by Michael Intenzo of Philadelphia, Pa.

"I used to think Nehru jackets were cool, too!" from Thomas and Laura Tomaszek of Cedar Rapids, Iowa.

The next cartoon caption contest will be announced in the Nov. 8 Linn's