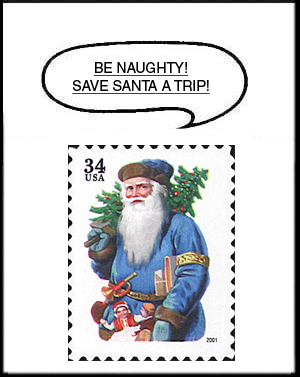 Linn's reader Nick Coppolillo of Dyer, Ind. is the winner of the December cartoon caption contest, which uses the 2001 34¢ Christmas stamp. The next contest will be announced in Linn's Feb. 13 issue.

The nontraditional blue Santa suit motivated most of the entrants in the December cartoon caption contest featuring the 2001 34¢ Christmas stamp shown here in Figure 3.

The favorite theme was problems with a washing machine, such as this line from Wilmer Schimke of New London, Wis.: "That's the last time I let them wash my suit with the other colored clothes."

A couple of entries put Christmas in a nonsecular context. A nice example from the Rev. Larry LaDassor of Stewartville, Minn., is: "I may be important, but Jesus is still the reason for the Season!"

Going from religion to politics, Nancy Foutz from Stone Ridge, N.Y., represents several readers who made this connection: "I am the official Santa of the blue states!"

The nonphilatelic line winner for this month comes from Nick Coppolillo of Dyer, Ind., whose line shown in Figure 3 plays off the threat that naughty children will not get presents in their stockings. Of course, that begs the question as to who leaves the coal that is the second part of the threat.

On the philatelic side, the winner is the Rev. John Smith from Cyrus, Minn.: "I'll still do overnight delivery."

"An inverted Jenny in 1,000 stockings thanks to the sheets I bought and hid away in 1918!" from Jerry Login of New York City.

"Darn, a fine time for the reindeer to go on strike." from Thomas Rogers of West Allis, Wis.

"Say one word about my miniature tree, and no toys for you!" by the Rev. Thomas Misiewicz of Martinsburg, W.Va.

"Don't look now, but I think the pilot is unhinged!" from Steve Kotler of San Francisco, Calif.

"Guess I arrived too early for 'Forever' status." by Willi Kuehle of Eastsound, Wash.

"Wish we could do this in July when it is warm at night!" by Merle Farrington of Medway, Mass.

"How did I end up with an old blue letter carrier uniform?" from Steve Kotler of San Francisco.

The next cartoon caption contest will be announced in the Feb. 13 Linn's.