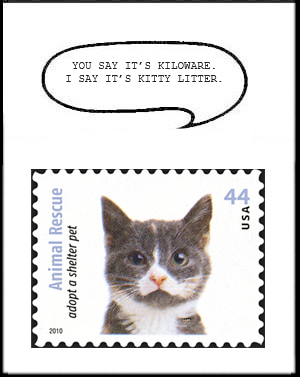 Mark Leon of Nevada won the January cartoon caption contest. The next contest will be announced in Linn's March 7, 2011 issue.

There were many wonderful entries for the January cartoon caption contest, which featured one of the cat stamps from the 44¢ Adopt a Shelter Pet stamp issue from 2010. Picking contest winners and even runners-up was tough.

A much-used theme centered on a favorite cat activity: catch and eat the mouse.

Al Dittmer of Dunedin, Fla., captured this perfectly with his entry, "What mouse?"

Paul Dunn from Painesville, Ohio, turned the subject to computers with "Who moved my mouse?"

Many entries started from the fact that the stamps are not lick-and-stick.

Larry Winkelsas of Kenmore, N.Y., has the cat saying, "At least the USPS could have made this self-adhesive smell like mouse or tuna!"

As a longtime servant of cats, I enjoyed many of the entries that centered on their personality and attitudes toward humans.

Of these, my personal favorite is one that will be immediately recognizable to other cat lovers, and maybe detractors as well: "Go ahead . . . amuse me" sent by Michael Intenzo of Philadelphia, Pa.

Vaguely reminiscent of the political spin seen so often since the advent of the 24-hour news cycle is this line that wins the nonphilatelic portion of the contest: "Did I swallow the parakeet? Define parakeet!" This entry comes from Jo-An Watson of Kalamazoo, Mich.

The philatelic line winner for this month is shown in Figure 3 and comes from Mark Leon of Las Vegas, Nev., who considers the possible uses of a large quantity of little bits of paper.

For the uninitiated, kiloware is a mixture of stamps – often seen as a box full of unsorted stamp corners torn from envelopes.

"How many perfins do you need?" by Stephen Banks of Sacramento, Calif.

"At least I won't chase your mailman away!" from William Hess of Bonita Springs, Fla.

"The Christmas tree was fun. Now I'm ready to lick some stamps!" sent by Marci Jarvis from Fairfield, Calif.

"I may have nine lives but I wish I were forever" from Claude Paquin of Atlanta, Ga.

"You don't have to lick my back for me to become attached," sent by Michael Moticha from Apple Valley, Calif.

"What's wrong with thinking outside the box?" by David Torres in San Angelo, Texas.

"You think you're leaving me here? I've got your address!" from Gary Walls of Chicago, Ill.

The next cartoon caption contest will be announced in the March 7 Linn's.