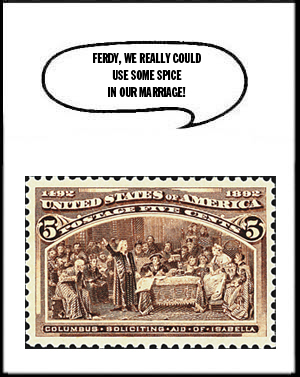 Bradley R. Miller of Alabama is the winner of the July cartoon caption contest, featuring the 5¢ Columbian issue of 1893. The next contest will be announced in Linn's September 21 issue.

The most-used theme for the July cartoon caption contest, in which readers were asked to be King Ferdinand and Queen Isabella on the stamp in Figure 2, was the "don't forget" theme. The illustration on the 5¢ Columbian stamp from 1893 is Columbus entreating the Spanish royals for financial support to fund his travels to India.

A good example of the "don't forget" theme is this line from Theodore Whitus from Olean, N.Y.: "Remember to bring back the grey poupon!"

The other major theme that appealed to entrants in the contest was the flat Earth assumption.

Although by the time of Columbus it was generally recognized that the Earth was round, there were skeptics. And that gives rise to lines such as "Columbus says the world is round...he's going over the edge even before his trip begins!" by Mark Saltzman from Edina, Minn.

A number of entries played off the crowd scene, with some form of "I guess you are all wondering why I called all of you here today..." from Thomas Misiewicz of Martinsburg, W.Va.

For the philatelic line winner, Paul Dunn of Painesville, Ohio, takes the prize with: "Selling small engravings of this scene should bring in enough to cover the expenses of this trip, don't you think Isabella?"

On the nonphilatelic side, the line in Figure 2 wins. It was sent in by Bradley R. Miller of Huntsville, Ala.

"We could even set up a postal route to the New World," by Wil Kwok from Las Vegas, Nev.

"No Chris, we're not going to grant you the air rights!" from Kees Adema of Fairfield, Conn.

"Chris, how do you feel about going to India in a ship built by the lowest bidder?" sent in by J.M. Kelly from Tucson, Ariz.

"Hmmm — if he makes it to New York, he'll give us Queens County and Kings County, but he will settle for Columbus Circle for himself," by Steve Kotler of San Francisco, Calif.

"Columbus, please tell me you're not doing this trip just so you can find new foreign stamps for your album," by Thomas and Laura Tomaszek of Cedar Rapids, Iowa.

"Besides, your majesties, think of the tens of thousands of new taxpayers!" from Merle Farrington of Medway, Mass.

The next cartoon caption contest will be announced in the Sept. 12 Linn's.