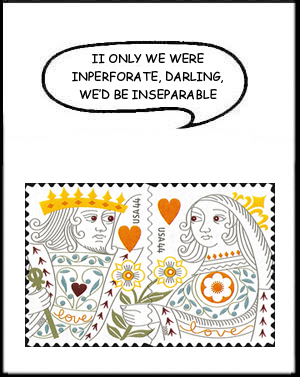 Scott Huffman of Texas submitted the philatelic winning line in the June cartoon caption contest, which featured the pair of 2009 Love stamps depicting the king and queen of hearts.

The king was invited to get a word in edgewise in the June cartoon caption contest featuring the se-tenant U.S. 44¢ King and Queen of Hearts Love stamps of 2009, shown in Figure 4.

The theme most used by readers came from the recognition that the queen's left hand is holding the flowers that get separated from the rest of her body when the stamps are pulled apart.

Don Babcock of Virginia Beach, Va., represents these entries with: "Yeah, though we may be separated, I'll forever have your hand to remember you by."

Thoughts about the jack of hearts and his part in the family are the third group of multiple entries. Among the best of these is "I'm concerned about Jack — he spends way too much time on his stamp collection," sent in by Paul Schrader of Placerville, Calif.

The nonphilatelic line winner is a variation on male resignation in the face of female insistence that probably goes back to antiquity. It is from Thomas Misiewicz of Martinsburg, W.Va., who has the king saying, "Well, okay, you can sit on my throne, but I am still the king!"

On the philatelic side, Scott Huffman of Dallas, Texas, thinks about removing the die cuts between the king and queen, and comes up with the line shown in Figure 4.

"I once dated Elizabeth Taylor, but she preferred diamonds," by Michael Intenzo of Philadelphia, Pa.

"I'll see your 44¢ stamps and raise you two forevers," from Hubert Bernheim of Hilton Head, S.C.

"Liz, I fear we'll have to raise the postal rates to pay for the wedding!" by J.M. Kelly of Tucson, Ariz.

"The nerve of that knave — he says we're going to end up separated!" from David Vikan of Dickinson, N.D.

"Sorry, dear, but I don't think a trial separation will work," sent in by Jim Dempsey of Walnut Creek, Calif.

"Sir Lancelot on a postage stamp? Now that would be a knight to remember!" by Steve Kotler of San Francisco, Calif.

The next cartoon caption contest will be announced in the Aug. 8 Linn's.