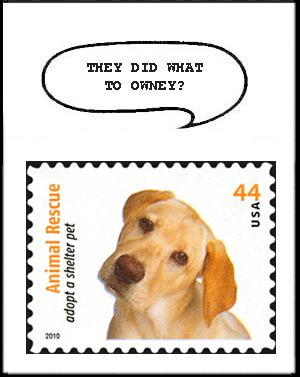 George DeKornfeld of New York won the March cartoon caption contest, which features a Dog stamp from the 2010 Adopt a Shelter Pet issue. The next contest will be announced in Linn's May 9 issue.

Among the most recognizable behaviors of dogs is their propensity to lick – people, themselves or each other.

So it was not a surprise that about half the entries in the March cartoon caption contest, which featured the Figure 4 stamp from the 2010 44¢ Adopt a Shelter Pet issue, dealt with dogs licking stamps.

Most cited self-adhesives as a game changer, such as this example from Gary Waffle of Long Beach, Calif.: "What do you mean I don't have to lick anymore?"

Another approach to this subject came from Steve Kotler of San Francisco, Calif.: "My master likes it when I lick his face, so why did he get angry when I licked his stamps?"

Mailmen and dogs are not always a happy combination, as typified by this line from Bruce McPhee of West Yarmouth, Mass.: "I think that mailman's leg looks just like a steak bone!"

Henry Miller Jr. of Summit Hill, Pa., was equally direct with this double entendre: "I never met a mailman I didn't like!"

The philatelic line winner, shown in Figure 4, refers to Owney, the mascot of the railway mail service, who was preserved after his passing. Owney is on display at the National Postal Museum in Washington, D.C., and will be honored on a new U.S. stamp in July. This line was sent in by George DeKornfeld of Millerton, N.Y.

On the nonphilatelic side, Thomas and Laura Tomaszek of Cedar Rapids, Iowa, are the winners with "You're taking me to get fixed? What's broken?"

"Late again! Did you stop in at the post office on the way home from work?" by Arthur and Marilyn Aho of Zanesville, Ohio.

"How much is that human in the window?" from Jerry Edelstein of Garrison, N.Y.

"Could this be forever?" sent in by Kenneth Judy of Greendale, Wis.

"If you like cats, I can learn to meow," from Michael Moticha of Apple Valley, Calif.

"It won't take much to care for us. My brother is a beagle and he works for Peanuts!" – another line sent in by Kotler.

The next cartoon caption contest will be announced in the May 9 Linn's.