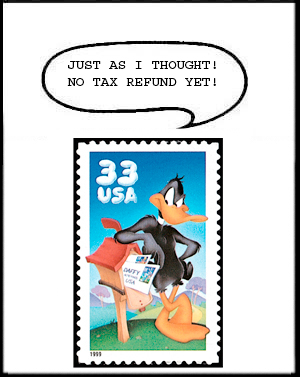 Thomas Misiewicz of West Virginia is the winner of the May cartoon caption contest, featuring the 33¢ Daffy Duck. The next contest will be announced in Linn's July 11 issue.

What do you think of when you hear collectors talking about duck stamps? Chances are that Daffy Duck does not come readily to mind, but he was the star of a 33¢ stamp in 1999 that served as the cartoon caption contest subject for May. The stamp is shown in Figure 3.

The fact that duck stamps are waterfowl hunting permit stamps was not lost on several entries as a parallel-of-concern to Daffy. A good example, from Al Dittmer of Dunedin, Fla., is: "You can do what with a duck permit stamp?"

The type of mail Daffy is expecting prompted several readers to consider Daffy's physical appearance. Michael Lantz captured this with "Bills, bills, bills...don't they know I've already got a bill?"

Both Daffy and Sylvester the cat – a Looney Tunes associate who appeared on a 32¢ stamp in 1998 (Scott 3204) – are known for regularly exclaiming "Sufferin' Succotash!" It is no surprise, therefore, to find that phrase combined with quite a few thoughts as entries.

The fire in his eyes is understandable as Daffy says, "Sufferin' Succotash! They better not stop deliverin' my fan mail on Saturdays!" This entry is from Ron Cullers of Peru, Ind.

Another of Daffy's exclamations compliments a question he might ask, to form the philatelic line winner, submitted by Jeanmarie Johnson of Granite City, Ill.: "That's despicable! How could they not put me on a forever stamp?"

On the nonphilatelic side, Daffy's disgust is evident in Figure 3, as he observes on a subject of importance to many of us at this time of year. It is from Thomas Misiewicz of Martinsburg, W.Va.

"I'm a duck that takes to water; something that I cannot say about most stamps anymore!" by Donald Hollingsworth of Toms River, N.J.

"I'm tired of getting socked on the nose!" from Kenny Tinsley of Hico, Texas.

"I'm still waitin' for the invitation to William and Kate's wedding," sent by Michael Intenzo of Philadelphia, Pa.

"Eeh, What's up Doc!! Good disguise, don't you think?" by B. Reder from Prattsville, Ala.

"Where's my box of free 'quackers' I ordered three weeks ago?" from Boyd DeGeest of Winona, Minn.

"Sell you my duck stamp collection? You must think I'm daffy!" sent in by Steve Kotler of San Francisco.

Thanks and a tip of the hat to all who entered. The next contest will be announced in the July 11 Linn's.