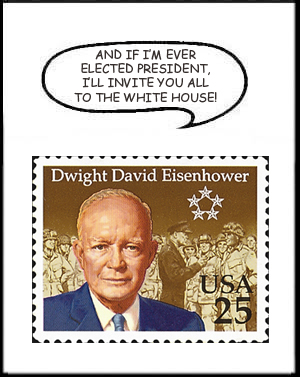 Linn's reader Marin Joyce is one of two winners in the September cartoon caption contest, which uses this 25¢ stamp honoring Dwight Eisenhower that was issued in 1990. The next contest will be announced in Linn's Nov. 14 issue..

First let me acknowledge that the September cartoon caption contest stamp, which honored Dwight D. Eisenhower on the Figure 3 stamp, pictures a serious scene – his meeting with paratroopers on the eve of D-Day.

A letter to Linn's editor in the Oct. 3 issue objected to this stamp being used in the contest, as the writer asserted, "For those who lived during the time of World War II, there is nothing humorous about it."

All the contest entries treated the subject respectfully, and still managed to provoke at least a wry grin.

In fact, the war was not the only possible subject that could be inspired by the Eisenhower stamp, which was issued in 1990 to mark his birth centenary. "Ike," a popular shortening of his name, was an authentic American hero. He not only served as Supreme Allied Commander, Europe during the war, but he also served two terms as president of the United States (1953-61).

Several entries focused on the president's name, such as this from Dallas Barker of Flint, Mich., who incorporates Eisenhower's presidential campaign slogan: "Just call me Ike. I like Ike rather than the longer name."

Another theme was the issues on the table during Eisenhower's presidency. Michael Intenzo of Philadelphia, Pa., captured this nicely with "Indochina, segregation, the Cold War, the H-bomb – and the Fonz thinks these are 'Happy Days'!"

The philatelic line winner for this contest cleverly uses the war scene as a backdrop. It comes from Paul Petersen of Lancaster, Pa.: "Now remember boys – check all German knapsacks for stamps for President Roosevelt."

On the nonphilatelic side, the line in Figure 3 wins for Marin Joyce of Tinley Park, Ill., whose caption reflects Eisenhower's oft-reported friendly meetings with groups of enlisted men.

"I don't care if there are extra fees for airmail, special delivery. You make sure Hitler gets the message!" by Nick DiFranco from Matawan, N.J.

"Have you ever tried Mamie's 'Chicken Normandy' with white wine?" from D. Smith of Wilmington, Del.

"I wonder why the USPS waited 'til I lost most of my hair before they put me on a stamp?" by Thomas Misiewicz of Martinsburg, W.Va.

"I wonder if this is how General Motors and General Electric got started?" sent in by Steve Kotler from San Francisco, Calif.

"This day will be definitive," by Fred Helms of Austin, Texas.

The next cartoon caption contest will be announced in the Nov. 14 Linn's.