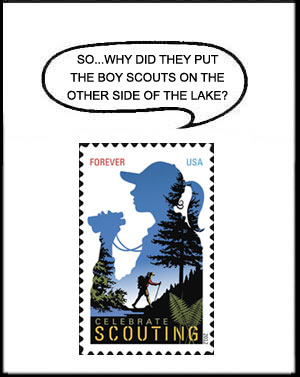 Linn's reader Dalene Thomas of Colorado is the winner of the March cartoon caption contest, which uses the 2012 Celebrate Scouting. The next contest will be announced in Linn's May 14 issue.

The March cartoon caption contest used the new Celebrate Scouting forever stamp, to be issued in June, that features a female figure as shown in Figure 3.

A paralleling design was used on a 44¢ stamp issued in 2010 with a male figure. Many of the entrants in this contest referred back to the prior stamp issue.

Two of them stand out. William Kriebel of Philadelphia, Pa., weighed in with:

"Those male Scouts are 'so last year!'"

In a different direction, Bradley Miller from Huntsville, Ala., has the Girl Scout crowing, "They boys may have gotten their stamp first, but our is forever!"

What would Girl Scouts be without Girl Scout cookies? Based on the entries, I'd have to say that thin mints are the favorite type for Linn's readers as they were the most mentioned by far. A good example is "Oh, girls! Leaving thin mints on the trail to find our way back certainly didn't work!" This was submitted by Tom Havens of Whiteland, Ind.

The nonphilatelic line winner, shown in Figure 3, is from Dalene Thomas of Lakewood, Colo. Although one of a number of entries that focused on the opposite sex, it fit the design best.

Claude Paquin of Atlanta, Ga., comments on the shrinking number of post office locations, and general lack of stock when you find one, to win the philatelic line portion of the contest: "Boy, the trips you have to take to find a well-stocked post office."

"Boy Scout at 3 o'clock!" by William Stiedemann of Menomonie, Wis.

"As a high school age Girl Scout, I am also a boy scout!" from Tom Tonozzi of Spring Valley, Ill.

"I don't see it anywhere. We finally shattered the glass ceiling!" by Tim Liljeberg of Brooklyn Park, Minn.

"That merit badge in lip reading sure comes in handy sometimes," from Steve Kotler of San Francisco, Calif.

"I told you we should have turned right!" sent in by Glenn Miller of Edmonton, Alberta, Canada.

"I think I see another rate increase in the distance," by Jeanmarie Johnson of Granite City, Ill.

Thanks and a tip of the hat to all who entered. The next cartoon caption contest will be announced in the May 14Linn's.