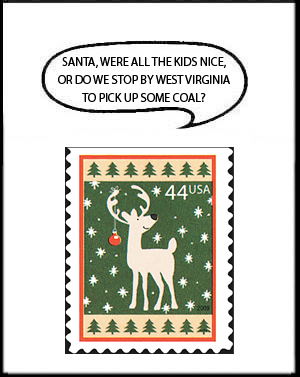 Rev. Thomas Misiewicz of West Virginia is the winner of the philatelic line portion of the November cartoon caption contest using the 44¢ Reindeer stamp. The next contest will be announced in Linn's Jan. 14 issue.

The reindeer's earring on the cartoon caption contest stamp for November – one of the 2009 Christmas stamps, pictured in Figure 4 – was what caught the attention of most readers who entered. And most of those made some connection to Rudolph and the legend of his nose-so-bright.

Joel Meyerson of Annandale, Va., expressed it this way: "Rudolph...Your nose! What happened to your nose?"

Dale Schubert from Lawrenceville, Ga., has the reindeer on the stamp saying, "Hey Guys! Guess what? I found Rudolph's nose."

The last topic inspiring multiple entries was the 44¢ denomination of this stamp, which Louis Vandorsky of Baltimore, Md., translated to "I'm not forever, but Christmas is!"

The philatelic line winner comes from Antonio Len-Rios of South Saint Paul, Minn. It refers to the separation method used with the 2009 Christmas issues: "Being die cut was scary, but it didn't hurt at all."

On the nonphilatelic side of the contest, Rev. Thomas Misiewicz of Martinsburg, W.Va., wins the prize with the line in Figure 4 featuring his own state.

"I don't care what Santa says, I'm not taking my earring off!" from Arthur Richardsen of Swampscott, Mass.

"Let's see, I need a blue ornament for my other side to be politically correct and balanced for flight," by Terry Jordan from Potomac Falls, Va.

"Santa, I just saved a bunch of money on your sleigh insurance by switching to Geico," sent in by Stan

The next cartoon caption contest will be announced in the Jan. 14 Linn's