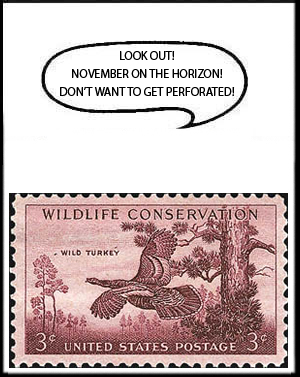 Denise Stotts is the winner of the philatelic line portion of the October cartoon caption contest using the 1956 3¢ Wildlife Conservation stamp. The next contest will be announced in Linn's Dec. 10 issue.

Think of a turkey like the one shown in Figure 3 on the 3¢ 1956 Wildlife Conservation stamp (Scott 1077), and most of us will also have visions of stuffing and cranberry sauce.

So, quite a number of entries in the October cartoon caption contest using this stamp highlighted the bird's sense of self-preservation.

A great example is the line "Off to Mexico...no Thanksgiving Day there!" sent in by Richard Robb of Mill Creek, Wash.

Bill Wells via e-mail gives the turkey a bit more flair with "Ha ha! You missed me!"

An entry from George DeKornfeld of Millerton, N.Y., has more the feeling of a lament: "This Thanksgiving make sure you're thankful...thankful you're not me!"

The theme of the social aspect of Thanksgiving – the inviting of friends to dinner – is represented by Jack Leonard of Hatboro, Pa., with "I'm heading over to the big house for dinner, but why did they say I should bring my drumsticks?

Winning the nonphilatelic side of the contest, Sebastian Glentz of Cullman, Ala., recalls the Pilgrims from England who started it all, with a reference to recent events: "Off to Las Vegas. According to Prince Harry, it's a real wild life refuge!"

On the philatelic side, Denise Stotts of Houston, Texas, has the turkey going to its afterburners with the line featured here in Figure 3.

"Don't shoot! I'm not one of the turkeys running for office this year," by E. Knapp of Falls Church, Va.

"At least you could have put me on an airmail stamp!" from Lewis Ladwig of Port Angeles, Wash.

"Let's soar over to the ATM machine and make a deposit," was submitted by Merle Farrington of Medway, Mass.

"I heard a Mr. Remington has something to give me..." from Michael Intenzo of Philadelphia, Pa.

"This wild turkey costume sure comes in handy during duck hunting season!" provided by Steve Kotler of San Francisco, Calif.

The next cartoon caption contest will be announced in the Dec. 10 Linn's.