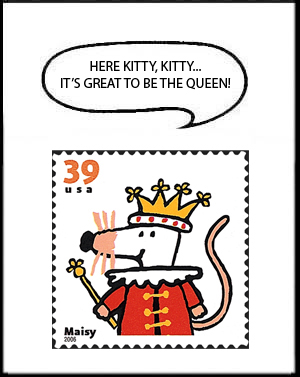 John Burns of Texas is the winner of the philatelic line portion of the September cartoon caption contest using the 39¢ Maisy stamp. The next contest will be announced in Linn's Nov. 12 issue.

Maisy Mouse, shown on the Figure 3 stamp, is royalty – but she became as popular in the United States as in her native England, where she first appeared as the lead character in a 1997 book by British author and illustrator Lucy Cousins.

When the United States issued its 2006 set of eight stamps honoring Childrens' Book Animals (Scott 3987-94), Maisy was one of two characters also honored by Great Britain in a joint issue, alongside The Very Hungry Caterpillar from the book of the same name by American author Eric Carle.

Heightened interest of late in the British royal family made this a natural for the September cartoon caption contest, but the most utilized theme was the even more topical U.S. presidential election.

A good example came from Laura and Thomas Tomaszek of Cedar Rapids, Iowa: "I'm glad I don't have to campaign for re-election."

The other theme that appealed to Linn's readers was the affinity of mice for paper.

As readers may know, prizes are awarded for the best philatelic and nonphilatelic entries.

This month's winner of the nonphilatelic component of the Maisy contest plays off the historic competition between mice and animals of the feline persuasion, as shown in Figure 3. The caption was submitted by John Burns of San Antonio, Texas.

On the philatelic side, Quentin Skoulund from Cary, Ill., gives us "Look Mum, I'm on a stamp from one of our colonies!"

Here are a few of the contest runners-up:

"I can't wait to see what Machin does with my profile," suggested Michael Jahr of Oconomowoc, Wis.

Jahr also provided this caption: "My favorite stamps are Swiss, of course."

"It's a royal pain to deal with washing self-sticks, watermarks, perforation measurement, etc.," was submitted by Lawrence Segel of Valhalla, N.Y.

"Prince Harry asked me to go to Vegas with him, but my agent says I don't need that kind of exposure," offered Bradley Miller of Huntsville, Ala.

Terry Hill of Canton, Conn., suggested, "From today, all mousetraps are banned in the United Kingdom and the USA."

"Me and Mickey would make a nice topical collection, even though he is a commoner," came from Norman Ritchie of Greeley, Colo.

The next U.S. Notes cartoon caption contest will be announced in the Nov. 12 Linn's.