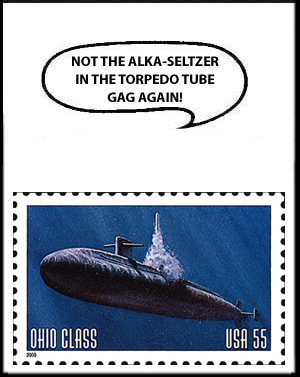 Scott Huffman of Texas, is the winner of the April U.S. Notes cartoon caption contest. The next contest will be announced in Linn's June 10 issue.

United States Postal Service problems seem to be never far from the minds of stamp collectors, as proven by those who entered the April cartoon caption contest, featuring the 55¢ Ohio Class attack submarine stamp of 2000, shown in Figure 3.

One approach to this subject came from Greig Best of Sacramento, Calif.: "Man the sonar — we have word the postal service is underwater..."

Another entry, from among several that addressed the cost of mailing a letter, was, "I get the sinking feeling that postage rates will rise again!" from Peter Elias of Plano, Texas.

The next most popular theme got half a dozen entries consisting of a single word: "Oops!" The earliest received came from Joel Meyerson of Annandale, Va.

Of course, the possibility of the accidental launching of a Trident II missile is nearly nil, but we don't have to stick strictly to reality with a cartoon contest.

Both of the contest winners use the torpedo-firing function of a submarine as basis for their entries. The philatelic line entry for our April contest is from David Vikan of Dickinson, N.D., who engages in a bit of wish fulfillment with "There! You'll never outbid me on a French Colonies collection again!"

On the nonphilatelic side, Scott Huffman from Dallas, Texas, wins the prize with the bubbly line shown in Figure 3.

"What do we do if a sperm whale wants to schmooze, Captain?" by Alfred Frichert from Bethpage, N.Y.

"After a hard day at work, I love to submerge myself in my stamp collection," from Robert Thornton of Valparaiso, Ind.

"Latest orders, sir. Due to sequestration, our movements will be restricted to Lake Erie," sent in by Michael Jahr of Oconomowoc, Wis.

"There's got to be an easier way to get fresh seafood!" from Steve Kotler of San Francisco, Calif.

"I said 'Open the mail,' not 'Open the hatch'!" by Edgar Dunlap of Gainesville, Ga.

"Just remember, Ohio will always be a four-letter word. Go Blue!" sent in by Steve Staton of Tucson, Ariz.

The next cartoon caption contest will be announced in the June 10 Linn's.

I also need to append a correction to the April 8 U.S. Notes column in which this contest was announced. Chad Snee, a retired U.S. Naval Reserve officer as well as the editor of the Scott catalog, dropped me a note to say that the captain of Ohio-class submarines is indeed a captain, a four-striper equivalent to a full colonel in the other services; not a commander (a three striper) as I had stated.