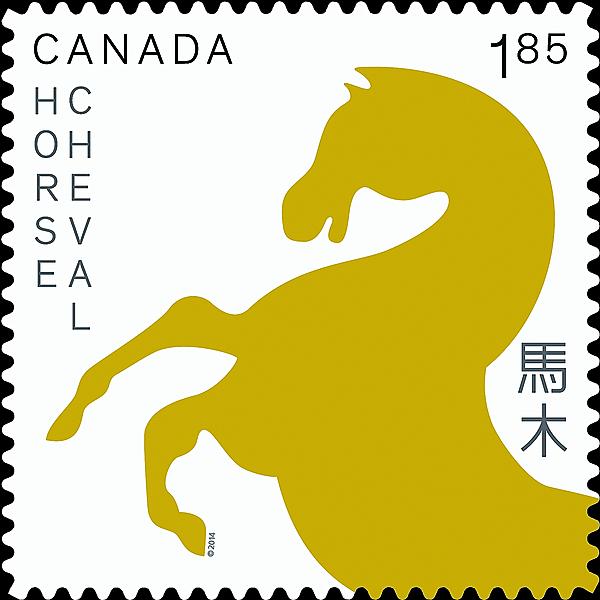 Canada’s $1.85 Year of the Horse stamp for the international letter rate will be issued Jan. 13. The design incorporates embossed foil for the horse silhouette. 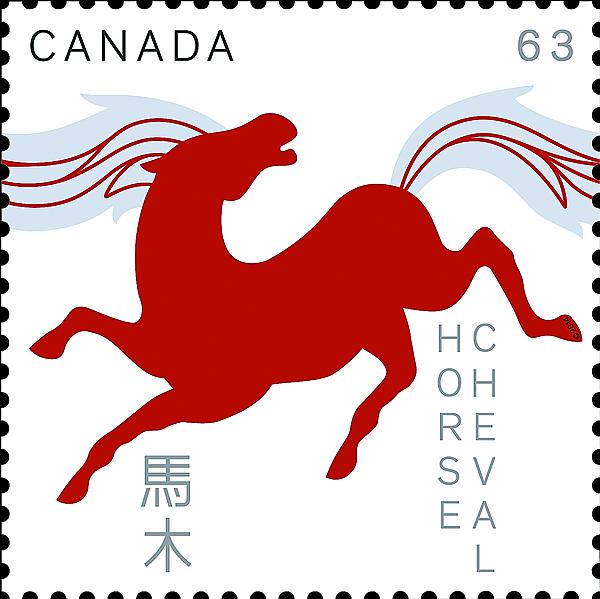 Canada Post will issue two Year of the Horse stamps Jan. 13 in its ongoing Lunar New Year series. This 63¢ stamp shows a red horse design. The $1.85 stamp with embossed design is pictured nearby.

The new issues are a 63¢ Year of the Horse stamp and a $1.85 international letter-rate stamp. Two nondenominated ($1.99) international-rate postal cards are possible, but had not been announced as of late December.

The 63¢ stamp will be issued in panes of 25 with moisture-activated adhesive.

The $1.85 international rate stamp will be issued in a souvenir sheet of one with moisture-activated adhesive, and in a self-adhesive booklet of six that is designed to fold up and fit in a wallet.

Also, for the third time, a two-stamp pane called a “Transitional Souvenir Sheet” by Canada Post will be issued. This pane will contain one of the new $1.85 stamps, and a $1.85 Year of the Snake stamp using the design from 2013.

Like the international rate souvenir sheets issued starting in 2009, the Year of the Horse souvenir sheet is in a vertical long scroll format with the stamp near the bottom of the sheet. Canada Post will also offer the souvenir sheet in uncut press sheets of 12.

The two postal cards, if issued, are likely to feature the same imprinted stamp designs as the permanent stamp and the $1.85 stamp, with enlarged versions of the designs on the picture side. The postal cards typically sell for $1.99 each.

The Year of the Horse stamp and souvenir sheet were designed by Louis Gagnon and Daniel Robitaille of the firm Paprika. The design of the 63¢ stamp shows a red silhouette of a horse set on a white background. The horse’s tail and mane are designed to flow continuously from stamp to stamp on the sheet.

The design of the $1.85 stamp features an embossed foil horse. Previous Lunar New Year stamps have incorporated small elements of foil but never for the complete design of the animal.

All of the stamps were printed on Tullis Russell paper, with general tagging on all four sides.

The stamps and souvenir sheets have PVA gum and are perforated about gauge 13.

Stamp information can be found in the newsroom section of Canada Post’s web site at www.canadapost.ca.

Canada’s stamps and stamp products are available from many new-issue stamp dealers, and from Canada Post’s agent in the United States: Interpost, Box 420, Hewlett, NY 11557.