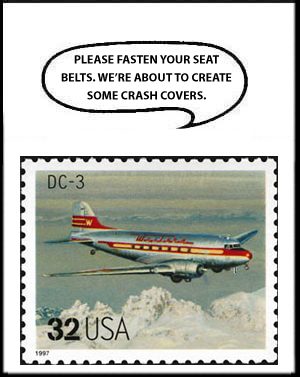 Juris Raudseps of West Newton, Mass., is the winner of the January U.S. Notes cartoon caption contest. The next contest will be announced in Linn's Mar. 11 issue.

Can a DC-3 fly upside down? Several entries in the January U.S. Notes cartoon caption contest posed that question.

The contest featured the 1997 32¢ stamp in Figure 2, which depicts the pioneering commercial air transport.

Many contest entries made reference to United States Scott C3a, the U.S. 24¢ airmail stamp error with an inverted airplane.

One that combines the two thoughts is this entry from Steve Kotler of San Francisco, Calif.: "If Jennifer, the copilot, flew the plane upside down, she would then be an inverted Jenny!"

Retired Air Force officer W.J. Lundquist of Deerfield, Ill., had a different take: "I haven't piloted a clunker like this since I flew that Jenny upside down."

The most often used theme put a political spin on a standard announcement from the cockpit, with the pilot announcing some form of "And if you look out the window to your right, you can see the Fiscal Cliffs of Washington, D.C." This caption was sent by Steve Tant of Hayesville, N.C.

Most entries were in the nonphilatelic category of the contest, but one of those philatelic lines stood out and is shown in Figure 2. This winning entry is the work of Juris Raudseps of West Newton, Mass.

On the nonphilatelic side, the winner is Terrence Tipton of Bel Air, Md., whose pilot exclaims, "What do you mean, the GPS says 'recalulating'?"

"Uh-oh, I think I forgot to have my mail stopped before I left home," by Paul Dunn of Concord Township, Ohio.

"Thank you for choosing us. I hope you enjoy your flight as much as we enjoy taking you for a ride," from Scott Huffman of Dallas, Texas.

"Is there a philatelist on board? I need help cancelling First Flight covers," by Michael Moticha from Apple Valley, Calif.

"Old, slow-moving, dependable; the DC-3 reminds me of the Postal Service," from Lawrence Segel of Valhalla, N.Y.

"Mayday! Mayday! This is the pilot. We've been perfed!" is another entry sent in by W.J. Lundquist from Deerfield, Ill.

"We'll be landing in about 10 minutes. All philatelists are reminded to fasten tongs and magnifiers, and place stamp albums in the upright position," by Marc Chevalier.

The next cartoon caption contest will be announced in the March 11 Linn's.