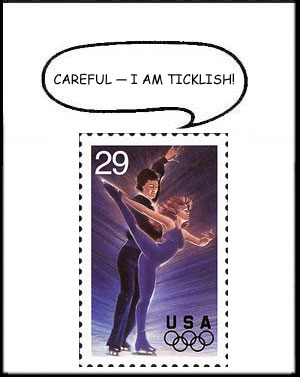 Ice dancing, much like any of the on-ice events at the Olympics, must be an exquisite form of torture for the athletes. The slightest slip or miscue threatens the focus of the skaters, and that can have disastrous consequences when it comes time for the judges to post their scores. The range of things that can go wrong is wide and deep.

So there was much material to play with for those who entered the cartoon caption contest for August, which featured ice dancers on the 29cent; Winter Olympics issue of 1994, shown in Figure 3.

Several entries suggested that the athleticism required plus the exertion of championship skating could have unexpected consequences. As a representative of this group, Gilbert Schaye from New York, N.Y., sent in "We should have used a stronger deodorant!"

Roger Wullen of Woodside, N.Y., had a different take on the same theme with, "Stay in front of me. You have a big hole in your tights!"

Another theme that drew multiple entries was an unexpected new use for the skates:

We who watch pairs skating and ice dancing probably never think about the little evidences of humanity that can become problematic. The winner on the nonphilatelic side of the contest identified one of these with the line shown in Figure 3. This was sent by Bob Svoboda of Lincoln, Nebr.

On the philatelic side of the contest, Lawrence Segel of Valhalla, N.Y., shows his frustration with the legislative process with "Instead of skating around the issue, Congress should subsidize the USPS!"

"If the next dance is the limbo, I quit!" by Steve Kotler from San Francisco, Calif.

"Is that a rip I just heard?" from Thomas Misiewicz of Martinsburg, W.Va.

"If I fall on this pass, I will be lillehammered," sent in by Norman Ritchie of Greeley, Colo.

"Like us, the Postal Service is skating on thin ice," submitted by an anonymous reader.

The next cartoon caption contest will be announced in the Oct. 14 Linn's.