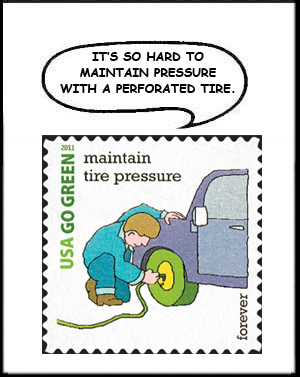 Francis Pogue of Virginia Beach, Va., wins the philatelic portion of the June cartoon caption contest. The Maintain Tire Pressure forever stamp is from the 2011 Go Green stamp issue. The next contest will be announced in Linn's Aug. 12 issue.

The availability of air for automobile tires at local service stations inspired two approaches to the June cartoon caption contest. It features, as shown in Figure 2, the commemorative forever stamp with the subject "Maintain Tire Pressure," from the 2011 Go Green stamp issue.

Harry Miller Jr., of Summit Hill, Pa., remarked on the increasing number of service stations that charge for compressed air for tires, by having the figure filling the tire saying, "I remember when air was free!"

Sarah Krembs of Manitowish Waters, Wis., recalled the few old-time stations that don't charge for air with "At least something at this gas station is still affordable!"

Hot air was the next most popular theme. John Hamilton of Lawrenceville, Ill., gives us a fine example with, "OK, senator, just start talking into that end of the hose."

Inflating brings to mind the opposite, and some entries applied that to philately. David Dickens of Lexington, Va., gives us, "I wish we could deflate the Inverted Jenny."

The winner in the nonphilatelic line category relies on the current economic situation for this comment on our time of troubles: "I don't mind this job. I'm still earning my pay as a vice president despite the downgrades." It comes from Quentin Skoulund of Cary, Ill.

As shown in Figure 2, the winner in the philatelic line category combines tire repair with the stamp hobby. The winner is Francis Pogue of Virginia Beach, Va.

"Do not overinflate! These tires are now pressure sensitive!" by Bob Finck of Fenton, Mo.

"Once people started paying for bottled water, could air be far behind?" from Kevin O'dell of Morro Bay, Calif.

"Darn, I'm going to be late for the first-day ceremony!" sent by May Aginsky of Brooklyn, N.Y.

"Only a guy with no eyeballs would have a two-tone purple car with bicolor wheels!" sent in by James Weigant of Cushing, Okla.

"My face was turning green until I began using the pump!" from Richard Zatorski of Mt. Laurel, N.J.

The next cartoon caption contest will be announced in the Aug. 12 Linn's.