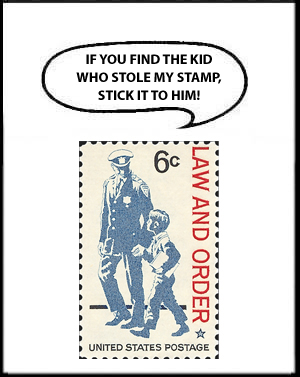 Boyd Degeest of Minnesota, is the winner of the March U.S. Notes cartoon caption contest. The next contest will be announced in Linn's May 13 issue.

It turned into the longest-running crime drama on primetime television.

That television connection was the major theme among entries in the March cartoon caption contest, featuring the policeman and youngster on the stamp.

Steve Kotler of San Francisco, California, nailed this subject with, "Stick with me, kid, and we could wind up on a TV show."

Harry Miller, Jr. of Summit Hill, Pa., represents the second most popular theme, centered on inadequate postage having been paid: "Officer, am I going to jail for forgetting to put a stamp on my letter to Santa?"

Current events came into play with the USPS threat to close down some Saturday mail deliveries.

Several entries suggested that there might be an alternative, as noted in this entry from Scott Huffman of Dallas, Texas: "What? The USPS should call for backup and have the police force deliver Saturday mail?"

Another approach to this theme came from Joseph Timko of Vicksburg, Mich.: "It's the LAW — I can't ORDER them to deliver mail on Saturday!"

And speaking of clever, the nonphilatelic line winner uses an item of police gear with "No, I don't carry a club, Billy." It was submitted by Marc Chevalier of University Place, Wash.

"My stamps in this album are so valuable I'm glad I have police protection!" by Lawrence Segel of Valhalla, N.Y.

"No, I can't arrest the post office clerk because he doesn't have a plate block he can sell you," from Fred Korotkin of Minneapolis, Minn.

"And if I ever catch you skateboarding down Main Street again..." sent in by William Poling of Bedford, Ind.

"So, tell me sir, do you get to guard stamp shows, too?" from Dan Such of Bethany, Okla.

"No, Johnny, I arrest perpetrators, not perforators!" by Frank Schmitt of Rockford, Ill.

"Oh, OK, but only once – I'll be the robber and you be the cop," sent by Edgar Dunlap of Gainesville, Ga.

The next cartoon caption contest will be announced in the May 13 Linn's.