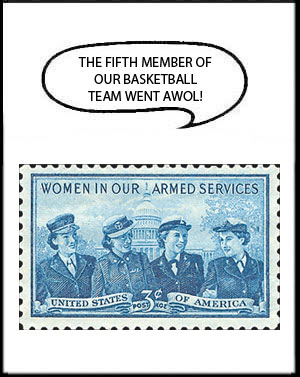 Edgar Dunlap of Georgia, is the winner of the May U.S. Notes cartoon caption contest. The next contest will be announced in Linn's July 8 issue.

As might have been predicted, the similarity in the words "mail" and "male" dominated the entries in the May cartoon caption contest. It features, as shown in Figure 3, the 3¢ Service Women stamp of 1952.

Philip Fondale of Pioneer, Calif., represents this group with "We don't know much about the mail, but we hear the males always go for a girl in uniform."

Another take on this is, "These uniforms make us look like mailmen!" from J.M. Kelly of Tucson, Ariz.

A second popular theme was the wider opportunities available to women to qualify for assignments formerly open only to men.

Carol Schoon of Fairfield, Calif., nails this one with "One of these days they'll move us out of the clerical pool and into a submarine!"

The contest winners both focused on the group. In the nonphilatelic category, the winner in Figure 3 comes from Edgar Dunlap of Gainesville, Ga.

On the philatelic side, Amy Wunsch takes the prize with "So what if we're on a stamp. Everyone knows women in the armed forces can't be licked!"

"Every time we go out to lunch, I get stuck with the tab. This time we split it." by Thomas Misiewicz of Martinsburg, W.Va.

"What?!! You vote no for combat duty?" from Ekundayo Azibo of Orangeburg, S.C.

"We're in the service, and they still expect us to cook dinner?" sent by Annemarie Mayer of New York, N.Y.

"So then my kid says, ‘Why yes, my mother does wear combat boots,'" from Steve Kotler of San Francisco, Calif.

"Will there still be men in the military in 50 years?" was sent in by Douglas Quine of Bethel, Ct.

"Well ladies, let's put our stamp on the American military," from Fred Helms of Austin, Texas.

The next cartoon caption contest will be announced in the July 8 Linn's.