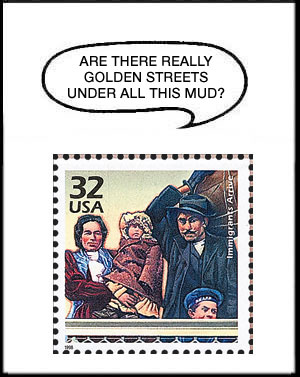 The subject for the September cartoon caption contest was the 32¢ Immigrants Arrive stamp shown in Figure 3, from the 1900s Celebrate the Century pane issued in 1998. Thankfully, nearly all the entries stayed away from the harsh politics of immigration.

There were, however, several themes that appealed to readers. The most prevalent is represented by this line sent by Carmen Mannella of Delmar, N.Y.: "It was a rough trip on a small boat. If we'd waited until next week, we could have sailed on that nice new ship, the Titanic."

A much more pressing problem was referenced by several entries; this example coming from Edgar B. Dunlap II from Gainesville, Ga.: "On American soil, we yearn to breathe free — just as soon as Mama changes junior's diaper!"

Everything is commemorated on covers these days, and many readers hit on that as a theme.

Two approached it from similar but different angles. The first is "Be careful with that satchel. It has the souvenir landing covers," from Bradley Miller of Huntsville, Ala.

On the nonphilatelic side of the contest, the winner shown in Figure 3, addresses a myth that drew some immigrants to the United States — even if it was not often believed literally. It is from Richard Hunt of Yellow Springs, Ohio.

The philatelic line winner this month is a bit fanciful, and also speaks to the golden future that many immigrants pictured: "At last! We can't wait to fill out our change of address forms," sent in by Ted Feldstein of Doylestown, Pa.

"Rose, I told you that selling my stamp collection in the old country would get us to the United States!" by Eric Wile from Greensboro, N.C.

"Someday they should put that beautiful statue of Miss Liberty on a postage stamp," by Wade Saadi from Brooklyn, N.Y.

"Express Mail? Nope. Airmail? Nope. We were delivered by paquebot!" sent by Bob Klass and Katy Globus of Sacramento, Calif.

"Look over there Pop! America's got KFC too!" from John Young of Decatur, Ala.

"Are we there yet?" by James Gunion from Allison Park, Pa.

"Dad, is the Statue of Liberty really holding a stamp album?" from Brian McClay of San Jose, Calif.

The next cartoon caption contest will be announced in the Nov. 11 Linn's.