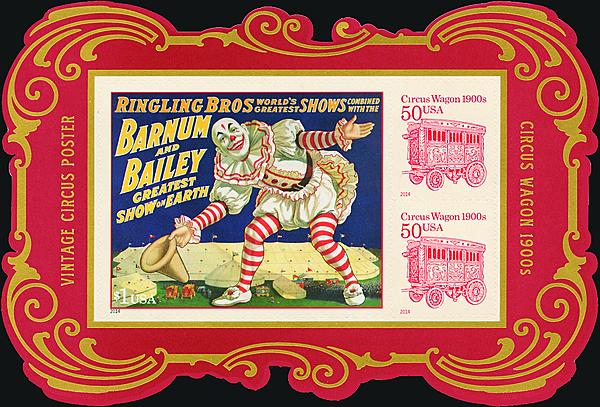 A mint $2 Circus souvenir sheet with die cuts around the three stamps, available only in the United States Postal Service’s 2014 The Stamp Yearbook.

After much hype and anticipation, the 2014 edition of The Stamp Yearbook is now available from the United States Postal Service.

Our copy arrived Dec. 16, six days after the Dec. 10 official first day for the $2 Circus souvenir sheet that is only available in mint condition in the yearbook.

Specifically, the yearbook contains the sheet with die cuts around the single $1 Circus Poster stamp and the two 50¢ Circus Wagon stamps.

Imperforate (without die cuts around the stamps) Circus sheets are available only from uncut press sheets.

Also included in the yearbook are most of the commemoratives issued in 2014, including intact panes of the Circus Poster, Batman, Civil War, and Fort McHenry stamps.

That Fort McHenry pane of 20 is overkill, because it’s a single-design issue. One stamp would have been enough.

Conspicuously absent is the Jimi Hendrix stamp. In fact, Hendrix is nowhere to be seen in the yearbook: There is no chapter devoted to him and his stamp.

A Dec. 4 press release from the Postal Service explains that the Hendrix stamp could not appear in the yearbook, along with any images or write up, because “permission to include the Jimi Hendrix Forever stamp issued in 2014 as part of the Music Icons series could not be obtained before going to press.”

So $64.95 buys you only part of the 2014 stamp program, plus the mounts to hold the included stamps, and the yearbook itself.

On the envelope containing the stamps and mounts, the Postal Service states that you can “enhance your 2014 stamp yearbook” by purchasing the definitive and high-denomination stamp packets for $27.95 and $37.95, respectively.

That works out to a grand total of $130.85, almost $30 more than the $102.26 Linn’s calculated for the cost to collect one each of the stamps issued in 2014. Wrapped up in that cost differential is the cost to produce the yearbook, and the added stamps in the Circus Poster, Batman, Civil War, and Fort McHenry panes.

Including all issued stamps in the yearbooks would satisfy the collector instinct for completeness. But the USPS would likely sell far fewer of them at a cost of more than $130.

One caveat: Be sure to examine carefully the Medal of Honor pair, the Farmers Markets strip of four, and the Janis Joplin single included in the yearbook.

These three items were cut from their panes, and sometimes the cuts come too close, resulting in damage to the serpentine die cuts of the stamps.

Sadly, all three in the yearbook Linn’s received suffer from some nipped die-cut peaks on one or more sides.

Setting aside these flaws, the 2014 yearbook is a nifty way to introduce a friend or family member to the fun of collecting stamps.