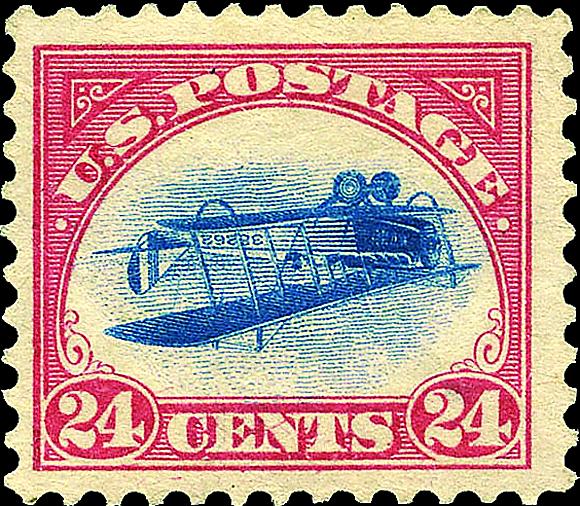 The May 13-14 auction by Matthew Bennett International will include one of the world’s most famous and recognizable stamp errors, the United States 1918 24¢ carmine rose and blue airmail stamp with inverted center (Scott C3a), commonly known as the Jenny Invert.

The stamp is one highlight from an auction that showcases a number of classics from the United States and Canada.

The sale will take place in the Herald Square suite of the New Yorker Hotel, 481 8th Ave. in New York City.

The Jenny Invert on offer is the example from position 89 of the original pane of 100 stamps purchased May 14, 1918, by William T. Robey at a Washington, D.C., post office.

No other Jenny Inverts ever fell into collector hands besides those from the discovery pane, though the Bureau of Engraving and Printing reported finding and destroying eight additional panes before they could be distributed to post offices.

The invert in the auction, according to Bennett, is “one of the most handsome examples of this renowned U.S. error extant,” and “one of a small number that is both fresh and well centered.”

As Bennett notes, 19 of the errors have straight edges along one or more sides, while some others are off center, have lost their gum, or suffer from more severe faults.

The position 89 example is described as “bright fresh and well centered within large margins, gorgeous, fresh and rich colors.” The stamp has original gum “just a bit disturbed,” a small thin spot and a light crease. It is accompanied by Philatelic Foundation expertizing certificates from 1991 and 2012, and offered with a presale estimate of $450,000, matching the value listed for Scott C3a in the 2014 Scott Specialized Catalogue of United States Stamps and Covers.

The collector of never-hinged U.S. stamps will find several intriguing offers in the Bennett sale, including the 1847 5¢ red brown Benjamin Franklin (Scott 1), which Bennett describes as the only example certified by the Philatelic Foundation as never hinged. The stamp with full margins is offered with a presale estimate of $6,750, the value for the unused (hinged) stamp in the Scott U.S. specialized catalog.

Also offered is a never-hinged 1893 $5 Columbian (Scott 245), “exceedingly well centered, as fresh as the day it was issued, with intense color, and full unblemished never hinged original gum, Very Fine to Extremely Fine.” The stamp carries a presale estimate of $11,000.

In the category of used U.S. stamps, the auction offers a single of the famed Orangeburg coil (Scott 389) with a faint diagonal crease, postmarked with a machine cancel and described by Bennett as having deep fresh color.

Because these stamps were created and used to mail bulky pharmaceutical samples from Orangeburg, N.Y., most of the known examples are affected by wrinkles or creases, Bennett notes. The example in this auction, with a 1984 Philatelic Foundation certificate, is listed with a $10,500 estimate.

Among the Canadian stamps offered is what Bennett describes as the finest of only three recorded pairs of the rare 1851 12-penny black Queen Victoria stamp (Scott 3), lightly marked with concentric ring cancels. The stamps have ample to large margins “except barely touching at the upper right,” and deep color. Bennett has assigned a presale estimate of $432,000 for the pair, based on the valuation of single stamps in the 2014 Unitrade Specialized Catalogue of Canadian Stamps.

Information about the May 13-14 sale is available at www.bennettstamps.com; or write to Matthew Bennett International, 1 Oldfields Road, South Berwick, ME 03908.