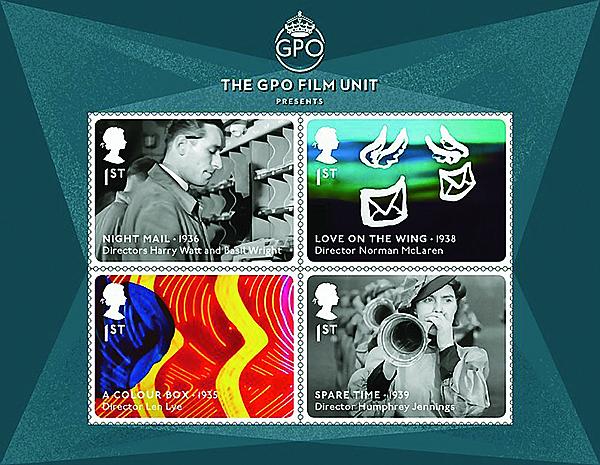 The souvenir sheet for the Great British Film issue commemorates four documentaries produced by the General Post Office’s Film Unit in the 1930s. 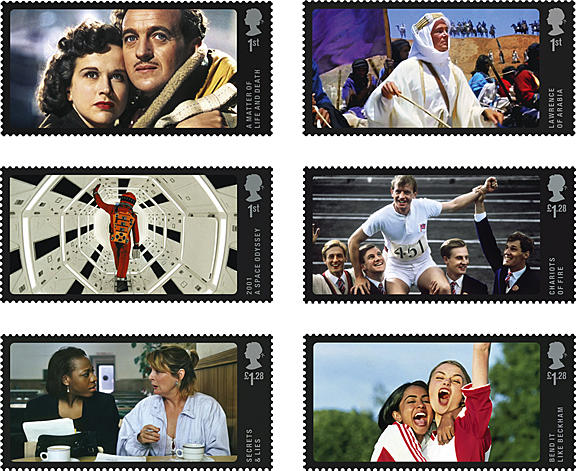 Six movies and the actors who starred in them are featured on the Great British Film stamps to be issued May 13.

Royal Mail consulted experts, polls, the public and the British Film Institute in selecting which films to honor on the Great British Film stamps.

Six of the stamps show scenes from movies made after World War II: A Matter of Life and Death, Lawrence of Arabia, 2001: A Space Odyssey, Chariots of Fire, Secrets & Lies and Bend It Like Beckham.

The stamps for the first three films are nondenominated, paying the first-class rate. These stamps are se-tenant, or side-by-side. The other three stamps also are se-tenant and are denominated £1.28 each.

The other four stamps in the Great British Film set focus on documentaries made by the General Post Office (GPO) Film Unit in the 1930s. These nondenominated first-class stamps are se-tenant in a souvenir sheet.

Part fantasy and part romance, the 1946 film A Matter of Life and Death tells the story of a Royal Air Force pilot who is caught between this world and the afterlife. In the United States, the film was released with the title Stairway to Heaven.

On the next stamp in the new set, Peter O’Toole is shown as the title character in Lawrence of Arabia. This 1962 film directed by David Lean won seven Oscars and appears on many lists of the greatest films of all time.

The 1968 film 2001: A Space Odyssey also is ranked among the best films of all time. Directed by American Stanley Kubrick, it was filmed in Britain and based on a short story by British science fiction writer Arthur C. Clarke.

In the stamp design, Ian Charleson as Liddel is being hoisted in the air. Ben Cross as Abrahams is on the right. Actors Nigel Havers, Nicholas Farrell and Daniel Gerroll also appear on the stamp.

Mike Leigh directed Secrets & Lies, the 1996 film about a woman and the daughter she put up for adoption, a secret she kept from the rest of her family. The stars, Brenda Blethyn as the mother and Marianne Jean-Baptiste as the daughter, are pictured on the stamp.

Bend it Like Beckham, the 2002 film about a teenage girl who wants to become a professional soccer player despite her parents’ objections, made stars of its two lead actresses, Parminder Nagra and Keira Knightley. The two are shown on the stamp.

The comedy was not only a huge hit in Great Britain, but in the United States and internationally as well. In 2010, it became the first western-made film to air on North Korean television.

With the exceptions of Hunter, Niven and O’Toole, the actors shown on the stamps are living.

The firm Johnson Banks designed these six stamps. International Security Printers printed them by offset in sheets of 36, sold in panes of 18 at most postal outlets.

The stamps measure 60 millimeters by 30mm each and are perforated gauge 14.5.

The header on the souvenir sheet reads “The GPO Film Unit presents.” This unit was established in 1933 to produce documentary films about postal and telephone services.

The directors of these documentaries are named on the stamps.

A scene from Night Mail, directed by Harry Watt and Basil Wright, is shown on the stamp at upper left. An article about the new stamps in the April issue of British Philatelic Bulletin says of this 1936 documentary, “The poetry of W.H. Auden and Benjamin Britten’s music combined to make a classic of the story of the postal special’s nightly journey from Euston to Glasgow.”

The stamp at upper right features Love On the Wing, a 1938 animated film by Norman McLaren about the joys of sending and receiving letters.

Another animated film, A Colour Box, is honored on the stamp at lower left. Len Lye directed this 1935 film about the parcel post.

Other products to be offered in conjunction with the Great British Film issue include first-day covers, a set of 11 postcards reproducing the designs of the stamps and the souvenir sheet, and a presentation pack including the stamps and text by Scott Anthony about the history of the British film industry and the work of the GPO Film Unit.