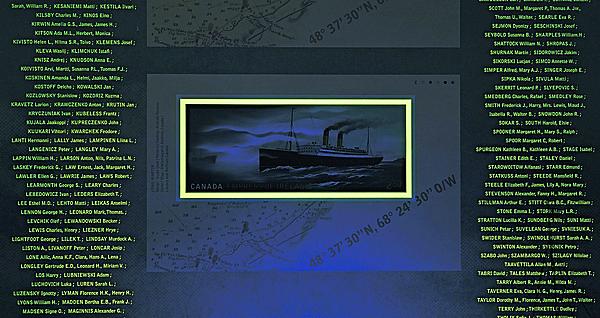 This photograph showing part of the press sheet under ultraviolet light reveals names of the crew and passengers who died in the 1914 accident. 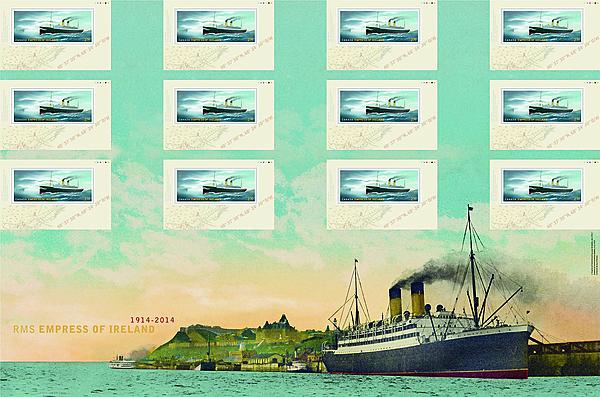 The press sheet for the Empress of Ireland souvenir sheet has decorative selvage at bottom. The names of those who perished in the ship’s sinking are printed with invisible luminescent ink in the selvage between the souvenir sheets; the names can

The $2.50 Empress of Ireland international-rate stamp also shows the Norwegian coal ship that tragically struck and sank the passenger ship on May 29, 1914. 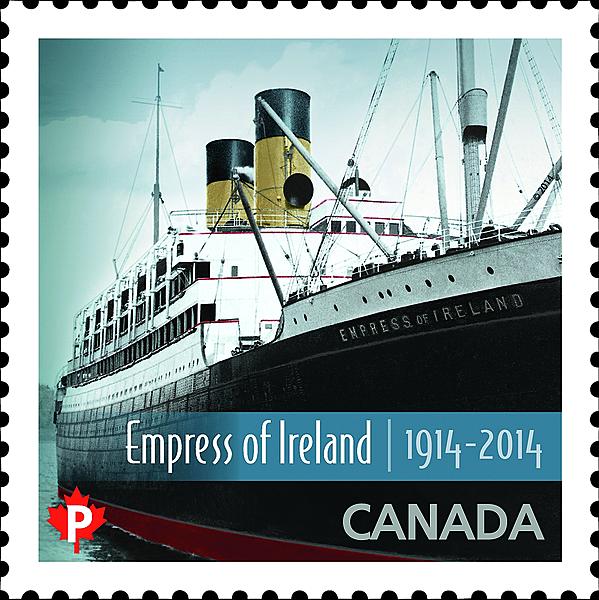 Canada’s nondenominated (85¢) Empress of Ireland permanent stamp, to be issued May 29.

Canada Post will commemorate the 100th anniversary of the sinking of the ocean liner RMS Empress of Ireland on May 29, with two stamp designs and two picture postal cards.

The ship tragically sank May 29, 1914, in the St. Lawrence River after it was struck by the Norwegian collier SS Storstad. Of the 1,477 passengers and crew on board the Empress, 1,012 perished.

A nondenominated (85¢) permanent stamp for Canada’s domestic letter rate will be issued in two formats, a self-adhesive booklet of 10 and a pane of 16 with moisture-activated adhesive.

A second design will be issued with a $2.50 denomination for Canada’s international rate, as a perforated souvenir sheet of one with moisture-activated adhesive.

The self-adhesive booklet stamp features a close-up illustration of the ship that first launched in 1906. The booklet selvage shows a map marking where the ship sank.

The perforated pane of 16 permanent-rate stamps using the same design is arranged in four blocks of four. The horizontal gutter includes the map and the inscription “Empress of Ireland 1914-2014.” It also includes a photograph of the buoy that notes where the ship is located today in the river. Four photographs “showing other aspects of travel aboard,” according to Canada Post, are shown in the vertical selvage: two between the upper blocks, and two between the lower blocks.

The single horizontal $2.50 stamp is considerably larger than the square permanent-rate stamp. The $2.50 stamp shows a color painting of the ship underway in the river, with the SS Storstad shrouded in the fog at the left in the stamp design.

Inscribed diagonally across the lower right section of the single-stamp souvenir sheet are the location coordinates 48º 37’ 30” north, 68º 24’ 30” west, the resting place of Empress on the river floor, near Pointe-au-Pere, Quebec.

The international rate stamp also will be sold in an uncut press sheet of 12 souvenir sheets with a different larger image of the ship at the bottom of the sheet.

The press sheet has the names of those who died in the tragedy imprinted in invisible luminescent ink on the press sheet selvage between the souvenir sheets. The names can be seen when the selvage is exposed to ultraviolet light.

The Empress stamps pictured with this article are publicity images created by Canada Post.

Through its eight years of service, the Empress transported an estimated 117,000 immigrants to Canada. One in 30 Canadians can trace family records to a relative that came to Canada on the ship, according to Canada Post.

During its eight years of service, the ship made 95 trans-Atlantic crossings.

On the evening of May 28, 1914, the ship left its dock in Quebec City, heading for Liverpool, England. The following morning the ship made a stop at Pointe-au-Pere.

Upon resuming its trip, the Empress spotted the lights of the Norwegian ship, several miles from its location. A thick fog rolled in, and around 2 a.m. the ships collided, even though fog whistles on both vessels reportedly were sounded.

There were just 465 survivors, fewer than one-third of the passengers and crew. Only four of the 138 children on board survived.

“It’s been our policy not to mark tragedies,” said Jim Phillips, Canada Post’s stamp services director in the agency’s May Details magazine. “But in 2012, with the 100th anniversary of the sinking of the RMS Titanic, we wanted to recognize the huge role Halifax played in the aftermath. With the RMS Empress of Ireland, here was a devastating event that happened in Canadian waters, on the St. Lawrence.

“It had an impact on the people of Rimouski and Pointe-au-Pere; it’s a big part of their history. Prior to its sinking, the ship had brought countless new Canadians to this country; it quite literally populated the Prairies. But so few people knew about it because breaking news of the First World War chased the Empress story off the front page. It was a story we had to tell and an anniversary we had to mark.”

The Empress of Ireland stamps were illustrated by Aristides Balanos. Isabelle Toussaint and Susan Scott designed the stamps.

All were printed on Tullis Russell paper, with general tagging on all four sides.

The permanent stamps with moisture-activated adhesive and the souvenir sheet stamp are perforated about gauge 13. The self-adhesive stamps have serpentine die cuts.

Five thousand uncut press sheets of 12 will also be available.

The prices quoted are in Canadian dollars.