Cancellations can be mistaken for overprints if struck just so

Figure 2. These two United States stamps from 1968 and 1998 are examples of how cancellations placed just so can make stamps appear to be marked with unusual overprints. 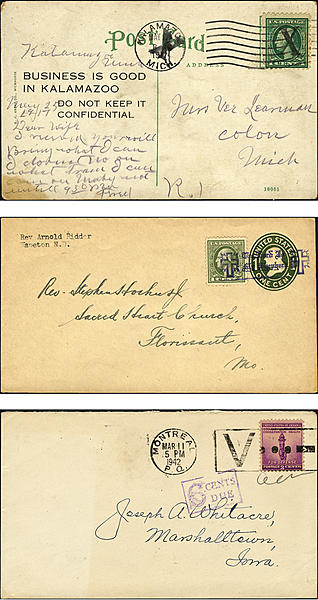 Figure 1. These three covers have curious cancellations that would appear to be overprints if the stamps were off cover.

Periodically in this column we look at United States stamps with cancellations that could be mistaken for overprints if the stamps were seen off cover.

In the first category are a Roman numeral X, a cross, and a Morse code V, the latter being a Montreal, Canada, cancellation placed on a U.S. stamp.

On that example, shown on the bottom in Figure 1, the Canadian post office marked the cover “6 Cents Due,” or double the deficiency.

Presumably that was paid upon delivery in Marshalltown, Iowa.

The example in the center of Figure 1 is a private cancellation from a religious organization, “The Lord Is My Shepherd.”

The lack of a postal cancellation makes it doubtful that this envelope ever passed through the mails. There is no date, but the 1¢ offset stamp with gauge 11 perforations was issued in December 1918, early in the availability period for the 1¢ Franklin envelope (1916-32).

The X handstamp on the postcard shown at the top in Figure 1 is a complete mystery.

The cancellation on this card, partially obliterated by another X, is dated May 1917, and the Xs have no relationship to anything else on the front or back of the card.

I wonder whether they were put there after receipt, as an X on the stamp before mailing would have invalidated the stamp for postage.

In Figure 2 there are two partial cancellations, including one on a 2¢ Frank Lloyd Wright stamp from a 1968 booklet pane of six.

Along the right side of this stamp are the words “Postal Service,” which I am sure is the result of a pictorial cancellation being placed just so.

Also in this category is the 1998 77¢ Mary Breckinridge definitive with a bar through the 77¢ denomination, and a seemingly new number “9” on the stamp.

I believe these are from a roller cancellation used on a large envelope.

If you have access to quantities of U.S. used stamps, or if you simply enjoy digging through dealer boxes at your local stamp show, you can find such anomalies.

Though few and far between, they make for interesting curiosities to amaze your philatelic friends.