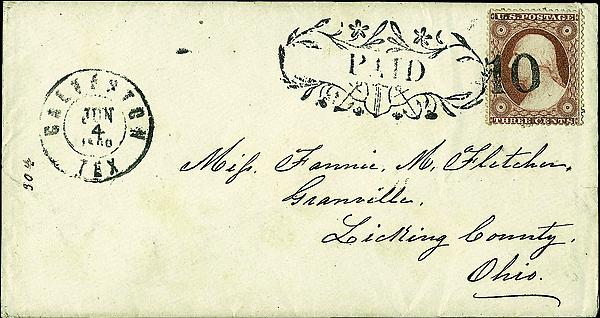 The February Siegel sale also included a Galveston, Texas, postmaster’s provisional on cover, mailed to Ohio in 1861. The cover quadrupled its top estimate to sell for $43,125. 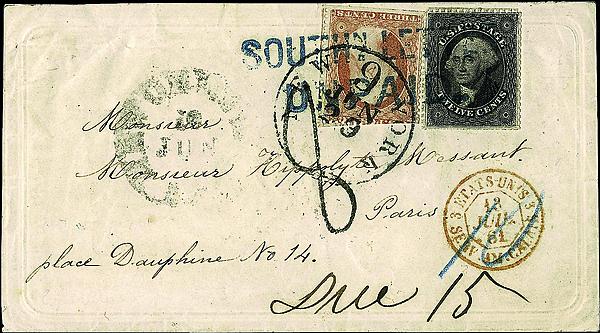 Robert A. Siegel Auction Galleries of New York offered this 1861 Southern Letter Unpaid, one of only five known to a foreign destination, at the firm’s Feb. 26 auction. The cover sold for $60,375.

Robert A. Siegel Auction Galleries in New York offered the Benjamin Wishnietsky collection of Confederate States stamps and postal history on Feb. 26, with many items on the market for the first time in decades.

As Southern states were seceding in the spring of 1861, mail continued to be sent north via Louisville until June, but Federal authorities decreed that United States stamps on letters from the rebel states had to be removed.

Given the backlog of mail, this proved unworkable, so the Louisville postmaster (a man with the remarkably apt name of John J. Speed) devised a two-line handstamp reading “South’n Letter Unpaid” to quickly obliterate the disallowed postage.

Fewer than 30 covers are reported with this marking, of which only five are to foreign destinations. The one offered in the Siegel sale, sent from New Orleans to Paris, is franked with a 12¢ Washington (Scott 36B) and a 3¢ Washington (26). It has a manuscript “Due 15” at the bottom, compensating for the invalidated stamps, converted by a large “8,” indicating 80 centimes to be collected from the addressee.

A cover with a handstamped postmaster’s provisional of Galveston, Tex., with an ornate “Paid” and a numeral 10, quadrupled its top estimate to sell for $43,125.

Sent to Ohio, it managed to pass from South to North in the final days before mail was suspended. It is the only example of the Galveston issue used with a U.S. stamp.

A blockade-run cover from Matamoros, Mexico to Washington, Texas, went for $27,600. Franked with a Confederate States 10¢ Davis, Die B (Scott 12) and smuggled into the South through the remote Port Lavaca, this is one of just two covers known to have traveled this route.