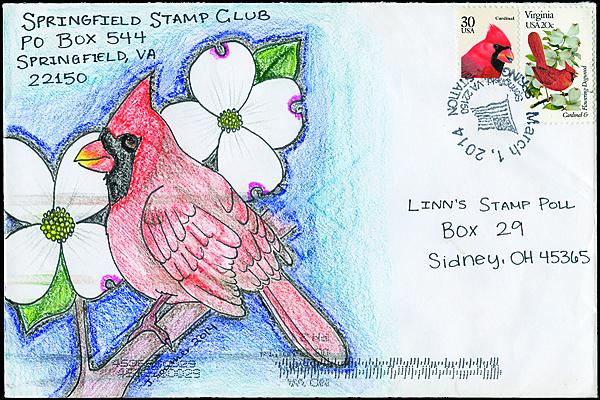 A member of the Springfield Stamp Club of Springfield, Va., created the winning entry for the 2013 poll-ballot envelope decorating contest. Jennifer Souther’s delightful colored-pencil drawing features a cardinal resting on a dogwood branch with

Later this year, we will roll out a brand-new Linns.com website.

There will be new content sections, noticeably more interactivity and more up-to-the-minute posting of stamp news from around the world.

Among the new features being developed for the site is a web log, or blog, where authors can expound upon whatever might be on their minds as it relates to our beloved hobby.

To keep the Linns.com blog fresh and exciting, we are looking for a handful of collectors, dealers and others who are interested in sharing their philatelic perspectives with their fellow Linn’s readers.

Unlike news or feature writing, blogging is a bit more relaxed. The writer has more freedom to let personality and style shine through.

If this strikes you as appealing, send a note of interest to linnseditor@linns.com and put “Linn’s Blogger” in the subject line.

We will then contact you and explain how to get started.

The ballots have been tallied, and the winners are … well, we will announce the winners of the 2013 Linn’s United States Stamp Popularity Poll in the May issue of Linn’s Stamp News Monthly, which will be published in a few weeks.

In the meantime, and to build some anticipation, we are revealing the winner of the poll-ballot envelope decorating contest announced in the Jan. 27 Editor’s Insights column.

Linn’s received 11 different envelopes. A couple appeared to be handmade, while others were festooned with pictures of stamps taken from a variety of sources, including the U.S. Postal Service’s USA Philatelic magazine.

Pictured here is the winning entry, which features a charming colored-pencil drawing of a plump cardinal resting on a blooming dogwood branch.

As can be seen by the return address, the envelope contained 2013 poll ballots from members of the Springfield Stamp Club of Springfield, Va.

In a note accompanying the ballots, the club’s president, Calvin McWhirter, said that the artwork was created “by club member Jennifer Souther, age 23.”

Note that the cardinal-and-dogwood theme also extends to the franking on the envelope: a 30¢ Cardinal stamp (Scott 2480) and a 20¢ State Birds and Flowers stamp for Virginia (1998) combine to overpay the required 49¢ postage by just 1¢.

Overall, a most attractive and eye-appealing cover, don’t you think?