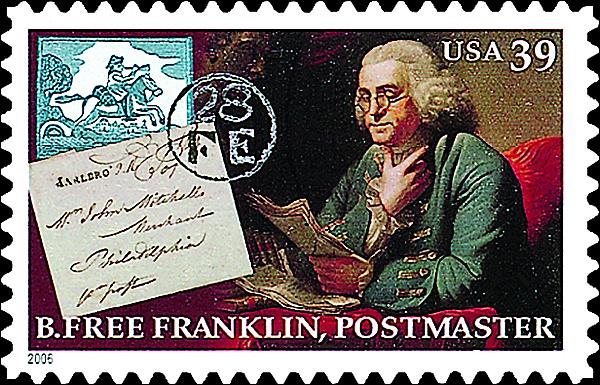 Figure 3. The cartoon caption contest stamp for April is the 39¢ stamp showing Benjamin Franklin as postmaster general. The rules to enter the contest are in the accompanying article. Entries must be received at Linn’s by April 28 for a chance to win a prize. 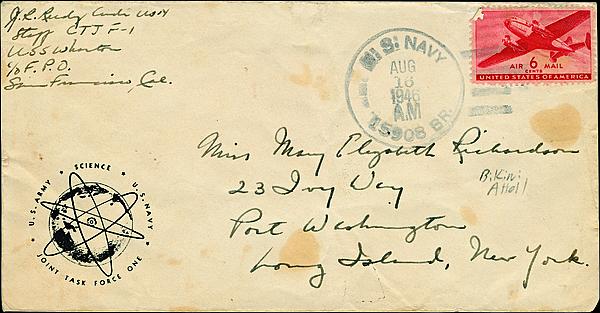 Figure 2. This cover is from an officer assigned to Joint Task Force 1, the United States Navy’s participation in Operation Crossroads, the Bikini Atoll nuclear test series that began in July 1946. 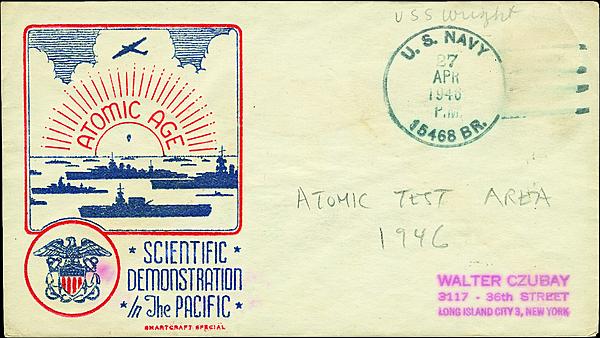 Figure 1. A cachet marking the “Atomic Age” is the principal feature of this April 27, 1946, cover that reflects the Bikini Atoll nuclear tests that began in that area of the Pacific Ocean.

Since World War II, it seems that everything that happens, whether good or bad, has a matching cachet on a philatelic cover — especially anything that has to do with the military.

Far from complaining, I see these covers as interesting reflections of history.

The covers illustrated here are examples from the Bikini Atoll nuclear tests that took place between 1946 and 1958. Bikini is an atoll (a coral reef surrounding a lagoon) in the western Pacific Ocean, now part of what is the Republic of the Marshall Islands.

During this period, 23 nuclear devices were detonated after the native Micronesian population had been relocated.

Mail from the area consists of commemorative covers, of which an example is shown in Figure 1, and mail from personnel assigned to Operation Crossroads, the name given to this early phase of the United States nuclear testing program. The U.S. Navy’s involvement in Operation Crossroads was designated Joint Task Force 1.

Nonphilatelic mail is much harder to find.

The example in Figure 2 is, according to the return address, from Cmdr. (later, Rear Adm.) James R. Reedy, then on the staff of the Commander of Joint Task Force 1. His duty station was aboard the USS Wharton (AP-7), which had served during WWII as a transport and hospital ship.

The USS Wharton was originally built in 1921 for the Munson Steamship Line as a cargo ship named SS Southern Cross. It operated in South American waters until acquired by the Navy in 1939.

In the spring of 1946, the USS Wharton was assigned to Operation Crossroads, transporting test observers for the July tests. It departed the area Aug. 27 and was decommissioned a little more than six months later.

The earlier cover, sent April 27 from Navy Branch ZIP code 15468, traveled by surface mail and did not need a stamp.

The Branch Post Office system, designed for security and ease of postal operations, often obscured the actual name of a naval unit. In this instance, there is no return address, but someone has marked “USS Wright” on the cover in pencil.

This is a puzzle, as the ship had been renamed the USS San Clemente in 1945, to clear the name Wright for the light fleet carrier, CVL-49, then under construction. The new USS Wright was not commissioned until 1947.

In April 1946, the USS San Clemente was en route to the United States via Pearl Harbor, reaching San Francisco May 2. Thus it appears, the ship did not actually serve with Joint Task Force 1, but somehow got cacheted covers marking the “Atomic Age.”

During his time in office, he mapped postal routes, established rules and procedures, and brought the service to profitability.

In other words, he did a marvelous job of adapting service to need and demand. Two hundred and thirty-five years later, the current postmaster general has both the same challenges and some new ones.

The U.S. population and the U.S. Postal Service’s geographic reach have soared beyond anything Franklin might have dreamed of. And largely thanks to technology, demand is down though need for the postal service, while reduced in quantity remains a driving force.

What would Franklin think if he woke up to face today’s challenges?

The cartoon caption contest for April gives you a chance to be Franklin and comment on the current situation. The stamp I am using is the 2006 39¢ issue (Scott 4024) depicting Franklin as postmaster, shown in Figure 3. It is from a block of four that marked Franklin’s 300th birthday.

Your task is to put yourself at Franklin’s desk and consider what he might be saying or thinking about the current state of the postal system, and what could be done to fix it.

You also can address politics, stamp issues, or anything else that inspires you.

For each winner the prize will be the book Linn’s Stamp Identifier, published by Linn’s (a retail value of $12.99), or a 13-week subscription to Linn’s (a new subscription or an extension). To be considered for a prize, entries must reach Linn’s no later than April 28.