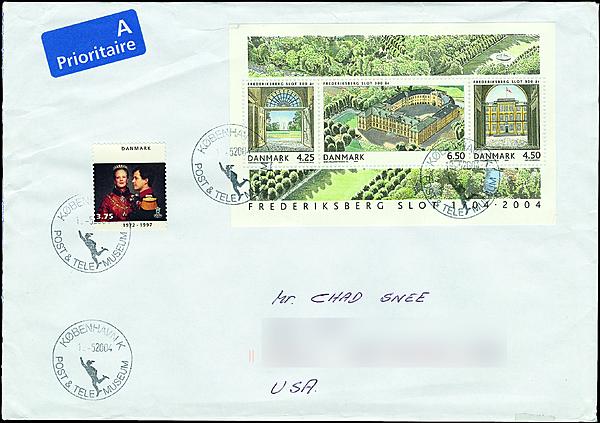 A treasured symbol of a wonderful hobby connection: a cover mailed to the author in 2004 from a friend in Denmark. Most of the 19 kroner in postage is paid with a 2004 Frederiksberg Palace souvenir sheet.

About a month ago, I marked 15 years of earning a living from stamp collecting. How best to describe my job? I leave that to former Linn’s senior editor Rick Miller, who once remarked that writing about stamps was like getting paid to eat ice cream.

March 15, 1999, was my first day on the job as a member of the Linn’s editorial staff. Since that time, I’ve honed my craft as a writer, learned from some of the greatest collectors of this generation and, best of all, forged myriad friendships that will last a lifetime.

Mentioning all these philatelic connections would vastly exceed the confines of this column.

So allow me to describe one such friendship, which began about 12 years ago.

This is a friendship that spans an ocean, because Arne lives in Denmark and I live in Ohio. Sometime in 2002, as I recall, Arne contacted Linn’s with a question concerning a United States definitive stamp. I was tasked with providing an answer.

Out of that initial contact blossomed a regular correspondence that continues to this day, via e-mail and, of course, traditional mail.

In the early days of our friendship, we focused on our individual stamp-hobby pursuits. Arne, I learned, collects used U.S. stamps with passion and zeal.

To assist him with that, I began sending batches of stamps clipped from business reply envelopes; an exercise that keeps stamps in albums, where they belong, and out of landfills.

He, in turn, discovered my interest in stamps from Scandinavia, particularly those engraved by the renowned Czeslaw Slania.

And he soon learned that my collecting instincts as a postal historian gravitate toward the unusual and seldom seen, such as postally used souvenir sheets.

Illustrated here is an envelope Arne mailed to me May 19, 2004. It is franked with a Danish souvenir sheet commemorating the 300th anniversary of Frederiksberg Palace (Scott 1278a).

In his letter, Arne told me that the 19 kroner in postage exactly paid the rate for a letter weighing between 50 grams and 100 grams mailed outside Europe.

Two years later, in May 2006, we met for the first time at the Washington 2006 international stamp exhibition in Washington, D.C. Among the many memories I have of that show, the ones I treasure the most are those of the dinner we enjoyed one evening at a local restaurant.

There’s nothing quite like breaking bread (and drinking good beer) over stimulating conversation to forge bonds that remain long after the food is consumed and the good-byes are said.

Just the other day, I was going through some covers and began organizing the various letters and parcels I’ve received from Arne over the years.

Perhaps it’s time they had an album of their own.

Thanks, Arne, for your friendship, philatelic and otherwise. Here’s to many more years of hobby camaraderie.

And thanks, too, to all of my philatelic friends, near and far. You’ve made the journey thus far immensely rewarding.