Message in a German beer bottle delivered after one century 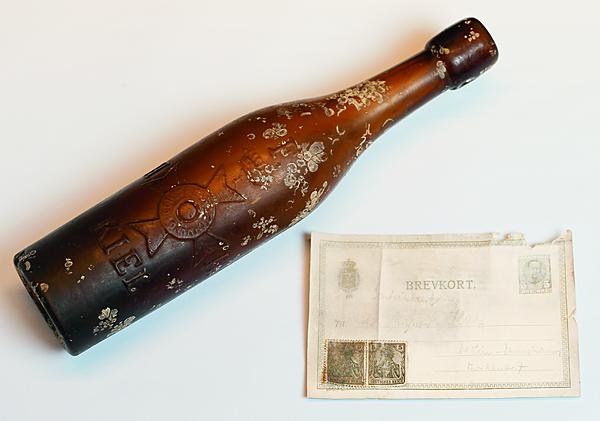 A German fisherman recently snagged a bottle containing a century-old message on a Danish postal card, and a pair of German stamps. Image courtesy of the International Maritime Museum of Hamburg.

The International Maritime Museum of Hamburg, Germany, reports the recent discovery of what it calls the oldest message in a bottle ever found.

It was written on a stamped postal card of one country, and accompanied by a pair of postage stamps from another.

Konrad Fischer, who appropriately enough is a fisherman in the Baltic Sea, was working off the German coast in March, about two nautical miles east of the Kiel lighthouse, when he snagged the century-old brown beer bottle in his nets.

He was about to toss the bottle back into the sea when he realized there was something inside.

The bottle contained a Danish postal card with a 5-ore green imprinted stamp depicting King Frederick VIII, who ruled the country from 1906 to 1912. The card was issued in 1910.

A handwritten message on the card was dated May 17, 1913, according to The Local, a German website that reports news of Germany in English.

The message, written by Richard Platz, asked the finder to return the postal card to him at his address in Berlin, according to The Local.

The enclosed stamps were apparently intended to serve as return postage.

Hearing of the find, the head of the International Maritime Museum, Peter Tamm, met with Fischer on board his cutter at Heikendorf, Germany, and arranged for the museum to temporarily exhibit the bottle and its contents.

Researchers tracked down Platz’s granddaughter, Angela Erdmann, who said her grandfather died in 1946 at age 54, according to The Guardian.

That means Platz was about 20 when he tossed the bottle into the Baltic.

Erdmann recently viewed the bottle and the postal card at the museum.

The oldest message in a bottle currently recorded by Guinness World Records is 97 years and 309 days at sea, or about three years less than the most recent fisherman’s catch.