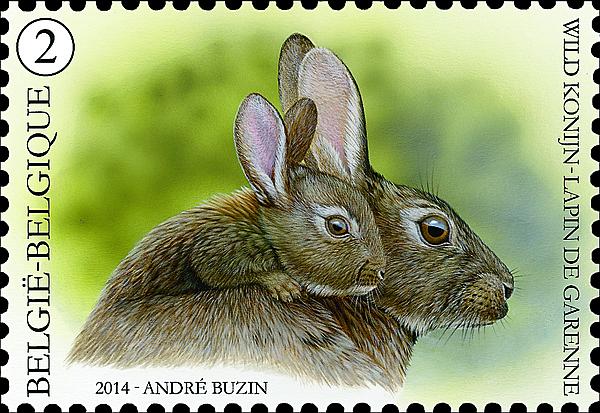 Figure 4. A mother and young rabbit are shown on this Belgian stamp designed by Andre Buzin. It was issued Feb. 17. 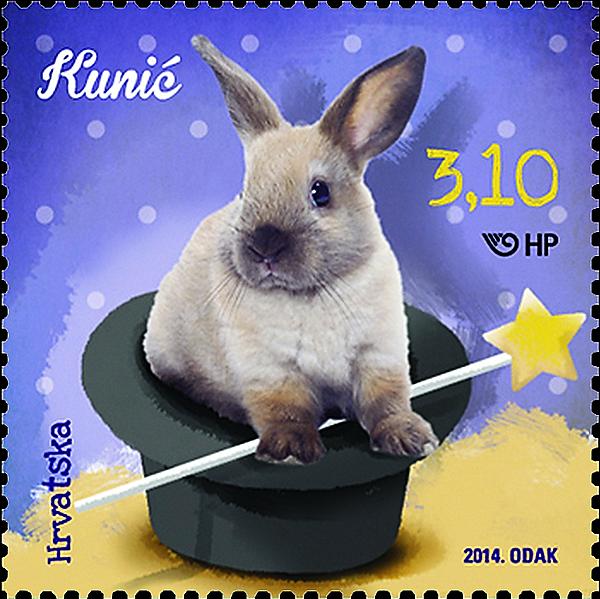 Figure 3. A European rabbit is included among the pets pictured in a Children’s World set of stamps from Croatia. 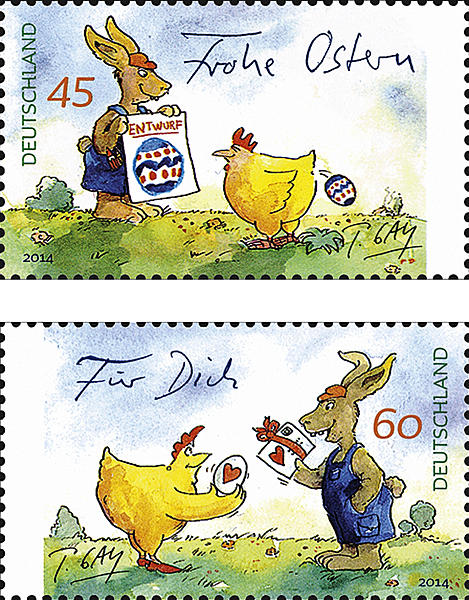 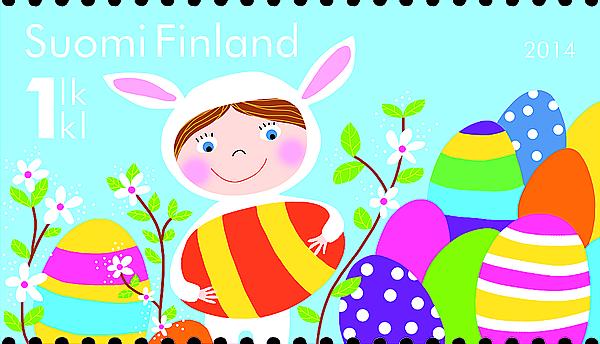 A symbol of Easter and spring, rabbits are pictured on several new stamps.

Paivi Unenge designed the stamp. Joh. Enschede of the Netherlands printed it by offset in panes of 10. A total of 1.5 million stamps were produced.

According to information from Finland’s postal administration, Itella, “Easter is the third most popular card-sending occasion in Finland after Christmas and Valentine’s Day. In 2013, Finns sent a total of 1.4 million Easter cards.”

The greeting card manufacturer Hallmark reports that Easter is the fifth most-popular card-sending holiday in the United States, with an estimated 43 million Easter cards exchanged annually.

Figure 2 shows both stamps. The €0.45 stamp on the top bears the message “Happy Easter” in German: “Frohe Ostern.”

Like the Finnish Easter stamp, this German stamp includes a rabbit and Easter eggs. It also shows chickens, which often star in Gaymann’s cartoons.

In the design, a rabbit is instructing a hen on how to lay a decorated egg by holding up a sign showing an example. The German word “entwurf” at the top of the sign translates to “design.” The hen complies by laying a matching egg.

On the €0.60 stamp shown on the bottom in Figure 2, the rabbit and hen are exchanging messages of affection. The rabbit offers a love letter with a heart, and the hen offers an egg with a heart design. The greeting at upper right in the stamp design translates to “For You.”

Bagel Security-Print printed the stamps by offset in panes of 10. Additional eggs are pictured in the selvage of both panes.

The For You stamp was issued in three versions: as a self-adhesive, with moisture-activated gum, and as an imprinted stamp on postal stationery honoring a stamp show in Munich.

A popular fictional rabbit and a rare rabbit species will be pictured on Japanese stamps to be issued in May.

Thumper from Walt Disney’s 1942 animated film Bambi is shown on a stamp to be issued May 23. The design depicts Thumper laughing at Bambi, who has a butterfly on his tail. Flower, the skunk, shares in the fun.

This 52-yen stamp is in a pane of 10 se-tenant (side-by-side) stamps honoring classic Disney animated films, including Snow White and Pinocchio.

A pane of 10 se-tenant 82y stamps to be issued at the same time features Winnie the Pooh and friends.

The Amami rabbit (Pentalagus furnessi) will be included on an 82y stamp in the fourth set in the Harmony with Nature series.

The stamp will be issued May 15 in a pane of 10 with five different designs.

The series, which started in 2011, features endangered plants and animals.

A nocturnal, primitive rabbit found only in the forests on two islands in the Ryukyu Archipelago, Amami Oshima and Tokunoshima, the Amami is considered a “national living memorial.”

The Zoological Society of London’s EDGE (Evolutionarily Distinct and Globally Endangered) of Existence Programme says: “The only species in its genus, the Amami rabbit is one of the most primitive lagomorphs in the world. It is so different from other rabbits and hares that it is considered to belong to an early branch of the main rabbit-hare evolutionary tree.

“Its ancestors are believed to have diverged from other leporids between 10 and 20 million years ago, about half as long ago as ancestral rabbits separated from pikas.”

A total of 2.5 million panes of 10 were printed of the Disney Animated Films stamps.

Rika Hoshiyama designed the Harmony with Nature stamps. They were printed in a quantity of 800,000 panes.

A recent stamp from Croatia depicts a European rabbit inside a magician’s hat, with a wand under its paws.

Figure 3 shows this 3.10-kuna stamp. It was issued Feb. 21 as part of the third set of Pets stamps in the Children’s World series. Three other 3.10k Pets stamps issued at the same time show a chinchilla, hamster and guinea pig.

The new-issue announcement says that the European rabbit (Oryctolagus cuniculus) likes to cuddle and play, adding that if you don’t have time to spend with this pet, you should consider buying two so it will have company.

Natasa Odak designed the four new stamps. Zrinski printed them by offset in a pane of eight with the four designs se-tenant. A total of 150,000 examples were printed of each design.

Andre Buzin’s illustration of a mother rabbit with one of her kits on her back is pictured on the Belgian stamp in Figure 4.

This nondenominated “2” stamp for nonstandard-size domestic mail was issued Feb. 17 in a pane of five different designs. The other stamps picture mother and baby designs of the fox, lynx, deer and wild boar.

All of the illustrations are by wildlife artist Buzin, who is best known for designing Belgium’s long-running Bird definitive series that began in 1985. He also has designed stamps for Luxembourg, Mauritania, Rwanda, Senegal and Zaire.