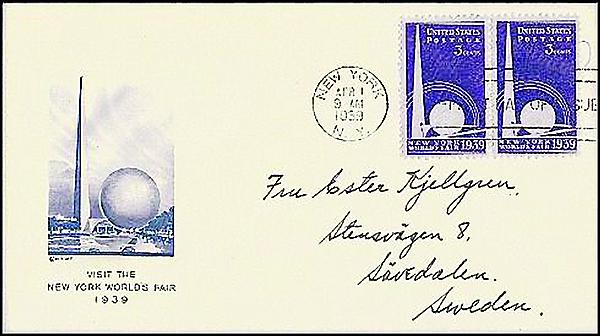 The first ArtCraft cachet was created for the first-day cover of the 1939 United States 3¢ New York World’s Fair stamp (Scott 853).

Founder Leo August began producing cachets in the late 1920s for flight covers, when the Newark Chamber of Commerce and city government didn’t want to be bothered with collector requests.

In 1932, older brother Sam joined the company, which incorporated as Washington Stamp Exchange. By then, the business had branched out to include first-day covers under the trade name “WSE” and others.

A first-day cover for the 1939 United States 3¢ New York World’s Fair stamp (Scott 853) was the first for the ArtCraft line.

In a 1973 interview for the American First Day Cover Society archives, Sam told interviewer Curtis Patterson they couldn’t afford to license the use of the fair’s symbols, the Trylon and Perisphere. However, Woodbury Engraving, which specialized in engraved stationery for businesses and had been printing envelopes for WSE, did have the rights to use the symbols, so ArtCraft was able to use the Woodbury design shown here.

Woodbury printed every ArtCraft cachet from that first issue through the 2002 34¢ U.S. Military Academy issue (Scott 3560).

The Augusts produced 2,000 to 3,000 of this first cachet, and some customers complained because they were engraved. Others obviously liked the style, because ArtCraft today is the longest-running cachet line, and the firm’s designs are still engraved.

WSE ended its other cachet lines in 1941 because of the Presidential series electric-eye varieties, finding it was too expensive to produce unique cachets for such a limited issue.

Today, elements of each cachet are printed using techniques other than engraving, but just for some of the cachet design, not all.

“We like the engraved look,” Washington Press president Mike August, Sam’s son, told Linn’s in a recent interview. “We’re still engraving the type on our cachets, and it’s a signature of what we’ve produced for 75 years, so we will probably keep doing that.”

“We certainly want to maintain that connection with our heritage and our legacy,” Devaney said. “It began with engraving, we still use engraving as an integral part of our product.

“We’ve certainly had to adapt to a lot of changes over the years as far as stamp technology, the type of stamps being issued, relationships with the Postal Service, those sort of things have all evolved over the past two decades or so,” Devaney added.

“The biggest challenge is the diminishing customer base,” August said at the company headquarters in Florham Park, N.J., about 15 miles from Newark. “Stamp collecting and cover collecting seem to be challenged by a failure to … bring younger people into these hobbies.”

And will ArtCraft and the Washington Press be bringing younger people into this family-run business?

“My son is currently working at the Smithsonian National Postal Museum … so he does have an interest in stamps and stamp collecting,” Devaney said. “We really haven’t talked about him coming into the business, but … I can hope.”