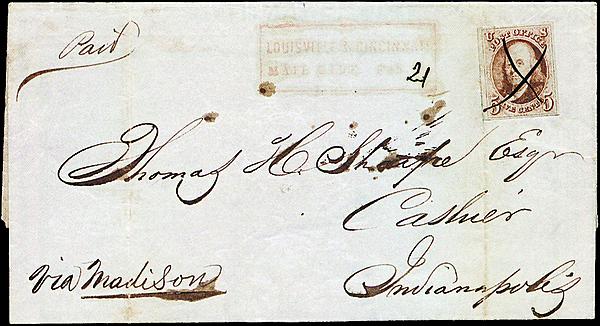 The only known cover franked with the United States 1847 5¢ Franklin stamp and struck with the red rectangular Louisville and Cincinnati Mail Line steamboat route agent postmark is being offered at auction April 26 as part of the Hugh V. Feldman collection of United States inland waterways. The sale is being held at the Westpex show.

Schuyler Rumsey will present a series of auctions April 24-27 at the annual Westpex stamp show.

Hugh V. Feldman was awarded the U.S. Classics Society’s prestigious Elliott Perry Cup in 2008 for his book of original research, U.S. Contract Mail Routes by Water 1824-1875. The collection of his covers offered April 26 is described by Rumsey as one of the finest of this difficult area.

The auction includes the folded lettersheet illustrated on page 1, franked with the 1847 5¢ red brown Franklin stamp, which is canceled with a manuscript X. To the left of the stamp is struck a red rectangular Louisville and Cincinnati Mail Line steamboat route agent datestamp with manuscript date, the handwritten “21” corresponding with the letter’s dateline of Feb. 20, 1851.

Addressed to Indianapolis, the lettersheet is endorsed “Via Madison” and “Paid,” and is described as the only recorded example of this steamboat route agent postmark used with the 1847 5¢ stamp.

Rumsey has assigned an estimate of $5,000 to $7,500 for this cover, which is accompanied by a 1968 Philatelic Foundation certificate, signed and guaranteed by Stanley B. Ashbrook.

A cover addressed to Torino, Italy, and sent via Prussian closed mail is offered with the original postage due slip, which is struck with a “Genova, Apr 22, 56” circular datestamp. The slip had been affixed to the cover with sealing wax and includes matching adhesion on the reverse. This cover is offered with an estimate of $5,000 to $7,500.

An intriguing item described by Rumsey as a Peter Winter engraved forgery shows a vertical pair representing the 24¢ Jenny Invert, the 1918 carmine rose and blue airmail error (United States Scott C3a). This bogus pair is stained and has no gum, and is offered with an estimate of $300 to $400.

Items offered from the collection of the late John E. du Pont, whose unique British Guiana 1¢ Magenta stamp will be auctioned by Sotheby’s June 17, include U.S. complete sheets, postage due special printings and balance lots, Canada and provinces stamps and postal history, a single 1878 Sidney and Black Hills cover, and an attractive block of four of the 1898 $1 Western Cattle in Storm Trans-Mississippi stamp (Scott 292).

The block carries an estimate of $5,250, the value listed in the 2014 Scott Specialized Catalogue of United States Stamps and Covers.

Lots for the upcoming auctions can be viewed and bids can be placed at www.rumseyauctions.com; or contact Schuyler Rumsey Philatelic Auctions, 47 Kearny St., Suite 500, San Francisco, CA 94108.