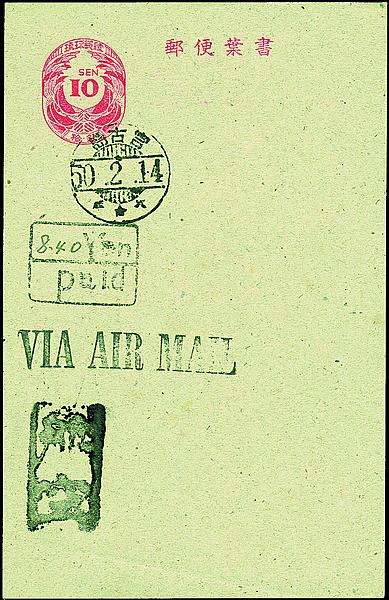 Figure 1. The revalued 15-sen Amami Gunto postal card from Amami gunto (district) in Ryukyu Islands, provisionally overprinted and issued in June 1947. An enlargement of the applied fee-paid handstamp is shown below the card.

The United States administered Ryukyu Islands from the end of World War II until 1972.

The stamps and postal stationery items are listed in the Scott Specialized Catalogue of United States Stamps and Covers, along with the provisionally overprinted stamps of Japan issued by the Allied Military Government immediately after the war.

Ryukyu Islands are composed of an archipelago of about 50 inhabited islands, plus more than 100 smaller islands to the south of Japan and north of Taiwan. Since the early 1600s, they have been part of Japan.

During World War II, the Allied Forces adopted a strategy of “island hopping,” which involved the removal of Japanese forces from the Pacific islands most remote from Japan and gradually retaking closer islands one by one until the American forces were within striking distance of the Japanese homeland.

Rather than attack and invade the Japanese mainland directly, the U.S. military decided to attack Okinawa, the largest of the Ryukyu Islands, which would give them a secure base of operations to continue the attack directly upon Japan.

U.S. forces invaded Okinawa April 1, 1945, followed by 82 days of intense mortal combat under extremely adverse conditions. Prior to the invasion, Fleet Adm. Chester Nimitz issued Proclamation No. 1, by which he assumed control of government as military governor and suspended all authority of the Japanese.

By the end of the battle, more than 12,000 American soldiers had died and another 36,000 were wounded. Japanese losses were estimated to exceed 250,000; perhaps half of these were civilians. Few buildings were left standing and almost all crops were destroyed.

In view of the conditions on the islands immediately after the battle, the U.S. military herded the inhabitants into internment camps.

Initially, there were no communications allowed between camps. However, the Ryukyu Islanders believed that surviving relatives could be found in different camps. Human nature compelled these people to escape from the camps to go find their relatives. In response, the American authorities understood the need for communications.

The islands were divided into four districts or “guntos.” Civilian postmasters were appointed for each district: Amami, Miyako, Okinawa and Yaeyama. Those last three districts used the respective postmaster’s seal to overprint the Japanese stamps, while the Amami district used an inspection seal.

These provisionally overprinted Japanese stationery items were valid for internal use until July 1, 1948, the same day that the first Ryukyu Islands postage stamps were issued. About two weeks later, Ryukyu Islands issued postal stationery as listed by Scott.

The Schoberlin catalog lists dozens of lettersheets and postal cards for the four guntos. For this column I’ll describe two examples.

In June 1947, the Amami gunto issued a Japanese 3-sen tan Warrior on cream postal card, validated and revalued to 15s by a fee-paid handstamp inscribed “Naze B.P. / Nanseishoto/T.P.” The card is shown in Figure 1.

The letters “B.P.” stand for “Bureau de Poste” and “T.P.” stands for “Taxe Percue.” These cards were limited to use in the Amami gunto (Schoberlin PVA9).

The catalog lists several lettersheets plus about 45 different postal cards for the Amami gunto. Each card has several listed varieties.

In July 1948, the Miyako gunto issued an airmail postal card (Schoberlin PVCM1), which is perhaps the one provisional card from this period with the highest visual appeal.

The basic card, shown in Figure 2, is a Japanese 10s scarlet Stylized Diego Blossom design on grayish cream card stock. Surcharged with an additional 8.40-yen manuscript rate in a framed “Paid” handstamp and further overprinted “Via Air Mail,” this example was favor canceled on the last day of use for this card before airmail stamps were issued.

Schoberlin lists one lettersheet for this district plus five postal cards, with only two listed varieties altogether.

Membership in the Ryukyu Philatelic Specialist Society is recommended. An application can be found at www.ryukyustamps.org.

I’ll be happy to send you a membership application in exchange for a long 49¢ addressed stamped envelope for U.S. delivery. Write to Michael Rogers, care of Linn’s Editorial, Box 29, Sidney, OH 45365.