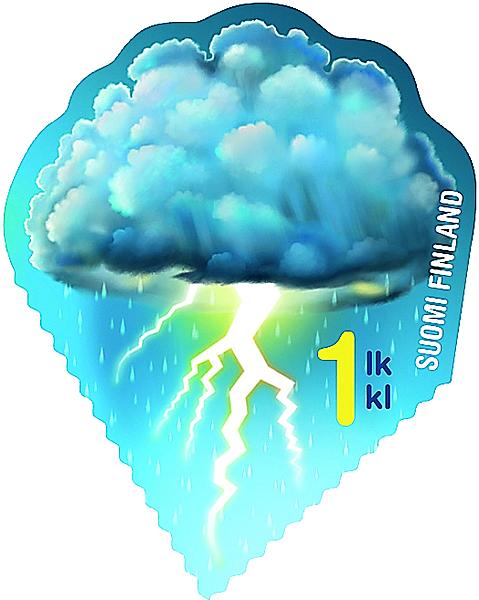 Figure 4. Finland will picture signs of the sky, including a storm, on stamps to be issued Sept. 8. 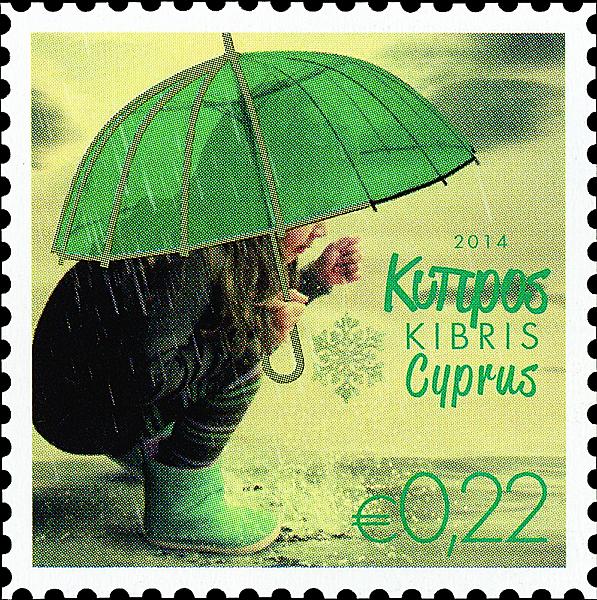 Figure 3. Rain and one snowflake represented the season of winter on this stamp from Cyprus.

Figure 2. The $20 lenticular souvenir sheet in Hong Kong’s Weather Phenomena issue shows the trajectory of Typhoon Vicente in July 2012. A similar sheet without the motion effect has a $5 stamp. 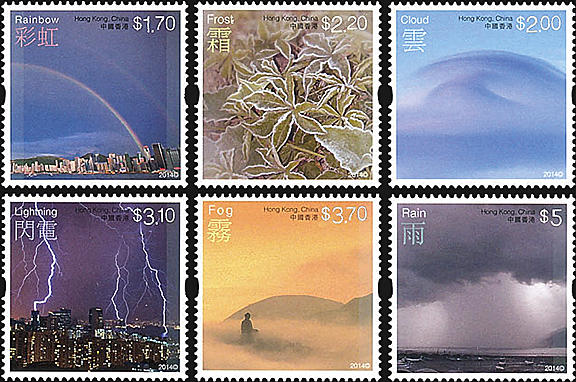 Several groups of students attended the first-day ceremony at the observatory.

Sandy Song, senior scientific officer of the observatory, called the stamps a dream come true for weather fans, who could now observe the weather through the stamps.

For the stamp designs, the observatory provided photographs of local weather phenomena, plus information about the events shown. The Photographic Society of Hong Kong, Sum Law, Ying Sung Lee and Kin Hoi Ngai also contributed to the new stamps.

The $1.70 stamp in the upper left in Figure 1 depicts a double rainbow over an urban area of Hong Kong.

The new-issue announcement from Hong Kong Post said, “When sunlight passes through water droplets and gets reflected twice, two rainbows are developed. The primary rainbow, formed by one reflection, is brighter while the secondary rainbow, produced by two reflections, is fainter.”

Figure 2 shows the $20 souvenir sheet picturing a satellite image of Typhoon Vicente as it approached Hong Kong in July 2012. The sheet includes a lenticular, or motion, effect showing the typhoon’s trajectory.

A souvenir sheet with a $5 stamp features the same design without the lenticular effect.

Benny Lau designed the stamps. Joh. Enschede of the Netherlands printed them by offset in panes of 25.

A girl playing in the rain is pictured on the stamp from Cyprus shown in Figure 3. An umbrella and boots help keep her dry.

Issued March 12 in a set highlighting the four seasons, this stamp represents winter. If you look closely, you can see a single snowflake near the center of the design, between the curved part of the umbrella’s handle and the country name written as “Kibris” and “Cyprus.”

According to the republic’s Department of Meteorology, “Cyprus has an intense Mediterranean climate with the typical seasonal rhythm strongly marked in respect of temperature, rainfall and weather generally. Hot dry summers from mid-May to mid-September and rainy, rather changeable, winters from November to mid-March are separated by short autumn and spring seasons of rapid change in weather conditions.”

While snow is rare on most of Cyprus, the Troodos Mountains are covered in snow in the winter.

The winter stamp is denominated €0.22. The €0.43, €0.85 and €1.71 stamps represent spring, summer and autumn, respectively. The designs include butterfly wings, flowers, a dolphin and fall foliage.

Melanie Efstathiadou designed the stamps. Giesecke & Devrient Matouskis of Greece printed them by offset in panes of eight.

The stamp shown in Figure 4 is shaped like a storm cloud at the top. The design also includes rain and lightning.

Other stamps in this set picture and are shaped like a rainbow, cumulus clouds, the sun, the Earth and other planets.

The booklet will include stickers so that eyes, mouths, hats and other items can be added to the stamps to create individual designs.