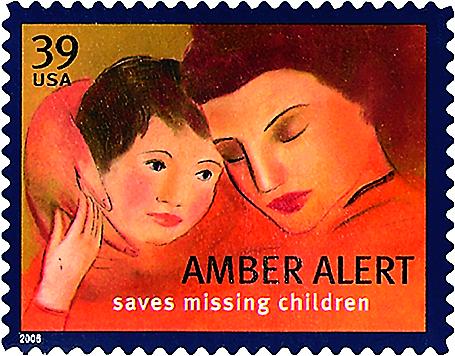 Figure 9. The 39¢ Amber Alert stamp was issued in 2006. Its central design shows a mother comforting her child. 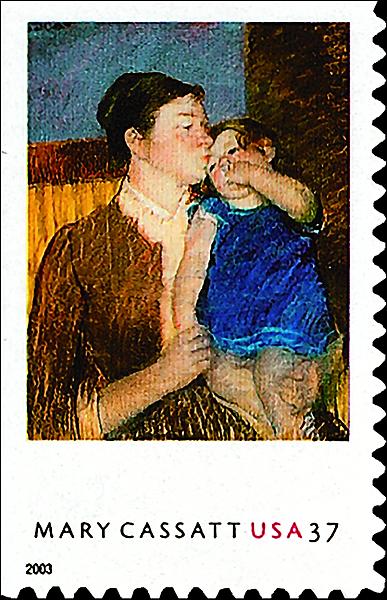 Figure 8. Several United States stamps show paintings by artist Mary Cassatt that depict a mother with her child. This 37¢ stamp was issued in 2003. 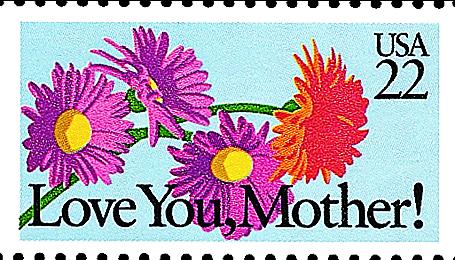 Figure 7. The 22¢ Love You, Mother! stamp was issued in a Special Occasions booklet with eight different designs in 1987. 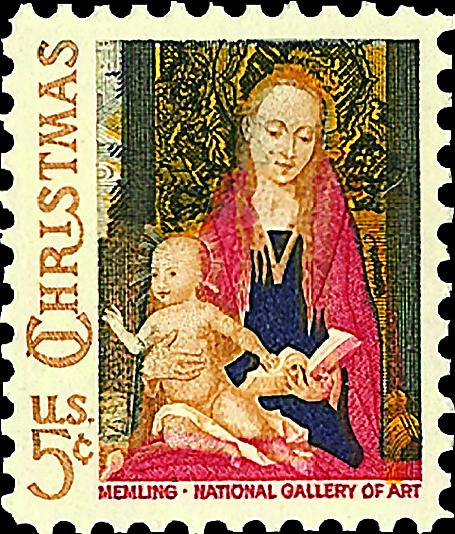 Figure 6. The first U.S. stamp to show the Madonna and Child was this 5¢ stamp from 1966. Dozens of different stamps with a similar theme have been issued since then. 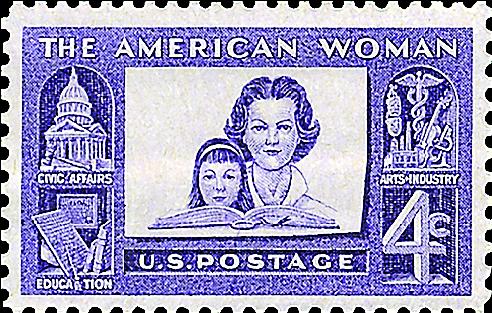 Figure 5. A mother and her daughter are depicted with an open book in the center of this 4¢ stamp from 1960 celebrating the American Woman. 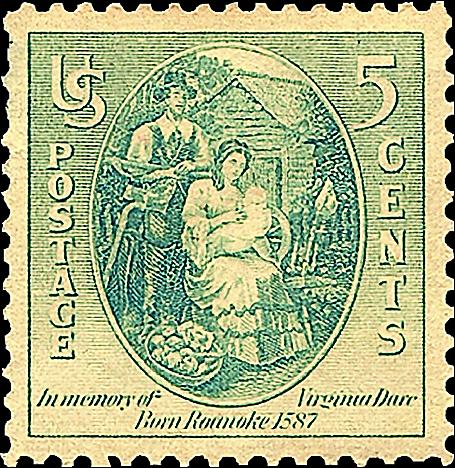 Figure 4. The infant Virginia Dare is shown in the arms of her mother on this 1937 5¢ stamp commemorating her birth. 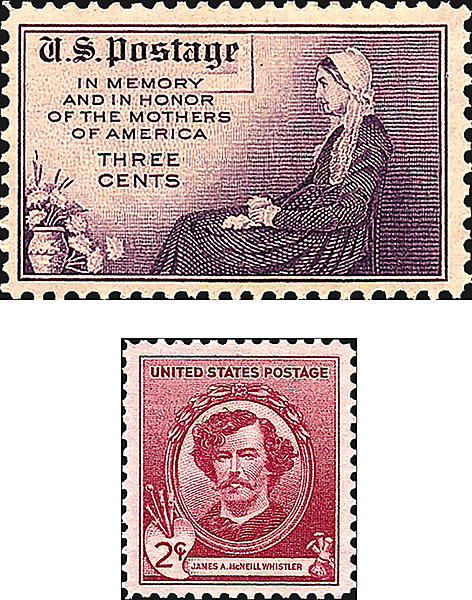 Figure 3. James A. McNeill’s painting of his mother was adapted for the design of a United States 3¢ Mother’s Day stamp in 1934, with input from President Franklin D. Roosevelt. Whistler was featured on a 2¢ stamp just six years l 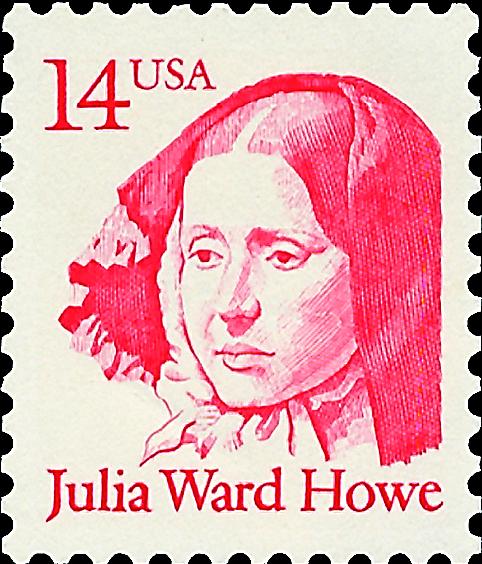 Figure 2. Julia Ward Howe, pictured on a 14¢ United States stamp in 1987, sought to establish a Mother’s Day tradition for the purpose of encouraging peace throughout the world. 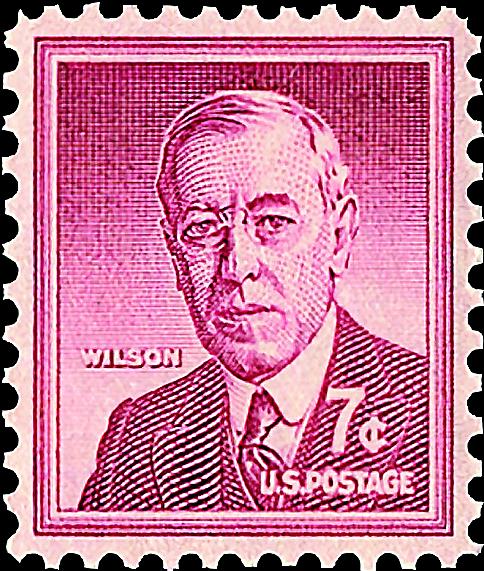 Figure 1. A 7¢ stamp from 1956 honored President Woodrow Wilson, who signed a proclamation establishing the first U.S. Mother’s Day in 1914, 100 years ago.

Efforts to establish a special holiday to honor mothers in the United States were finally successful 100 years ago, when President Woodrow Wilson signed a proclamation designating the second Sunday in May as Mother’s Day.

The proclamation recognizing a joint resolution approved May 8, 1914, was signed by the president the following day.

That document, now preserved among the National Archives, is also signed by Wilson’s Secretary of State, William Jennings Bryan.

Among the early proponents for a Mother’s Day observation was Julia Ward Howe, who is best known for writing the poem Battle Hymn of the Republic.

Howe was a peace advocate in Boston when she published her “Appeal to Womanhood Throughout the World” in September 1870, asking women to reject the devastation of war. She sought to establish a congress of women to promote “the amicable settlement of international questions.”

When the stamp was issued, the U.S. Postal Service wrote in the Postal Bulletin of Feb. 5, 1987: “Howe worked effectively and energetically for several causes, many associated with women’s rights. She also is credited with proposing a national day honoring American mothers in 1872, and was herself the mother of six children.”

Howe’s appeal for a Mother’s Day was taken up by Anna Jarvis, who successfully lobbied for the establishment of a national holiday.

However, soon after the pronouncement by President Wilson, Jarvis was angered by the commercialization of the holiday and by the efforts of other groups to raise funds for charities on Mother’s Day.

“Anna Jarvis’s idea of an intimate Mother’s Day quickly became a commercial gold mine centering on the buying and giving of flowers, candies, and greeting cards — a development which deeply disturbed Jarvis,” wrote Brian Handwerk for the National Geographic.

Jarvis eventually fought against the direction her Mother’s Day concept took, which might help explain why she never appeared on a stamp.

A stamp honoring the Mother’s Day holiday was created in 1934, however, with substantial input from President Franklin D. Roosevelt.

The stamp is an adaptation of James A. McNeill Whistler’s An Arrangement in Grey and Black, more popularly known as Whistler’s Mother, and was issued in the artist’s birth centennial year.

However, the adaptation includes added text that reads “In memory and in honor of the mothers of America,” a phrase written by Roosevelt in a sketch he prepared for Postmaster General James A. Farley.

Brian C. Baur, writing in Franklin D. Roosevelt and the Stamps of the United States 1933-45 (published by Linn’s Stamp News in 1993), reported that the cause for a Mother’s Day stamp was presented to the president and the postmaster general by Mrs. H.H. McCluer, who met with both men in January 1934.

Though in part the stamp was intended to honor the artist Whistler, it is most commonly known today as the Mother’s Day stamp.

This hybrid tribute is pictured at left in Figure 3.

Just six years later, Whistler himself was pictured on a stamp, a 2¢ rose carmine issue in the American Artists set that was part of the 1940 Famous Americans issue (Scott 885). The Whistler stamp is shown at right in Figure 3.

Sales of the Mother’s Day stamp were brisk, Baur wrote. He also pointed out that the president’s mother, Sara Delano Roosevelt, even gave the president a block of six of the new stamps with a handwritten message.

Roosevelt’s involvement in stamps honoring mothers did not end with the 1934 Mother’s Day issue.

In 1937, the president sketched out a design for a 5¢ stamp to honor Virginia Dare, the first child of English parents born in America.

“The central design is enclosed in a large upright oval and depicts Virginia Dare in the arms of her mother, who is seated in the dooryard of their cabin home,” the United States Postal Service wrote in its publication United States Postage Stamps.

The stamp (Scott 796) would be issued to commemorate the 350th anniversary of Virginia Dare’s birth, as well as the establishment of the settlement of Roanoke Island.

The stamp is pictured in Figure 4. Baur notes that Roosevelt asked that the stamp be developed as the first true square stamp issued by the United States.

Another stamp with ties to motherhood was issued in 1960 as the 4¢ American Woman commemorative.

The horizontal purple stamp (Scott 1152) is filled with images that represent civic affairs, education, arts and industry, surrounding a central design identified by the Postal Service as “a mother and a young girl with an open book before them, symbolizing women in the home.”

The stamp, designed by Robert Sivard and issued in association with a conference sponsored by the Women’s Bureau of the Department of Labor, is pictured in Figure 5.

The most popular subject for U.S. stamps showing a mother with child is the Christmas-theme Madonna and Child stamps, showing Mary with the infant Jesus.

The first of these is the 5¢ Christmas stamp pictured in Figure 6. Based upon a painting by Hans Memling, it was issued in 1966 (Scott 1321). Since then, more than 35 additional stamps have been issued almost annually with artist’s renderings depicting the Madonna and Child.

Just days after the first Madonna and Child stamp was issued, another mother and child were featured on a 5¢ stamp paying tribute to artist Mary Cassatt (Scott 1322).

Cassatt’s painting The Boating Party is the central vignette of the stamp. The National Gallery of Art points out that the painting shows a baby in its mother’s lap, in a rowboat.

A 22¢ stamp issued in 1987 doesn’t show a mother and child, but it does express the sentiment “Love You, Mother!” with four flowers against a pastel blue background (Scott 2273).

The stamp, shown in Figure 7, is from of a set of eight issued as a Special Occasions booklet pane of 10.

According to the Postal Service, the set was issued in response to requests for stamps that could be used for special events, “such as Father’s and Mother’s Days, birthdays, wedding and graduations.”

Other U.S. stamps have pictured mothers with children, including the 32¢ Kwanzaa stamp issued in 1997 (Scott 3175), the 32¢ American Art stamp showing the painting Mrs. Elizabeth Freake and Baby Mary (3236b), another stamp of the same set showing Mary Cassatt’s Breakfast in Bed (3236o), and yet another Cassatt painting, Young Mother, on a 37¢ stamp issued in 2003 (3804). Cassatt’s Young Mother stamp is shown in Figure 8.

A poignant scene of a mother and child was shown on a 39¢ public service stamp for Amber Alert, the emergency response service to locate and rescue missing children (Scott 4031). This stamp from 2006 is shown in Figure 9.

Although the Postal Service has no announced plans for a stamp to commemorate Mother’s Day during its centenary, numerous stamps have been issued in the past that celebrate motherhood in many different ways.