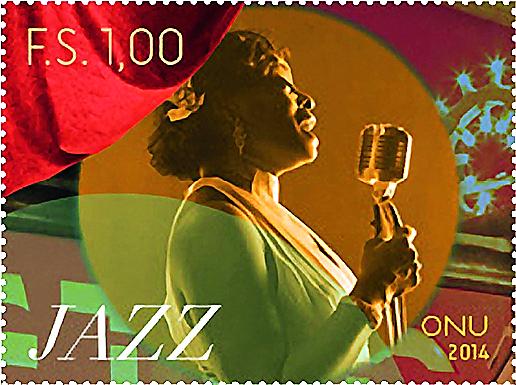 Figure 4. Stock photographs of jazz musicians are featured on several stamps in the United Nations’s April 30 International Jazz Day issue. This 1-franc stamp shows a jazz singer with a flower in her hair. 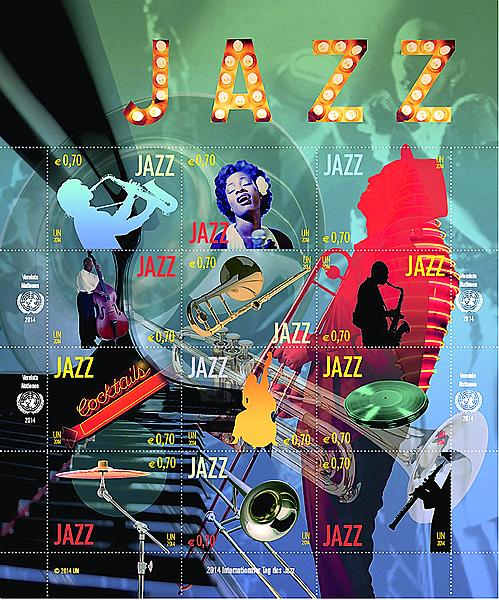 Figure 3. Jazz musicians, their instruments and a neon sign are featured on the €0.70 stamps in this International Jazz Day pane for use from the United Nations post office at the Vienna International Center in Vienna, Austria. 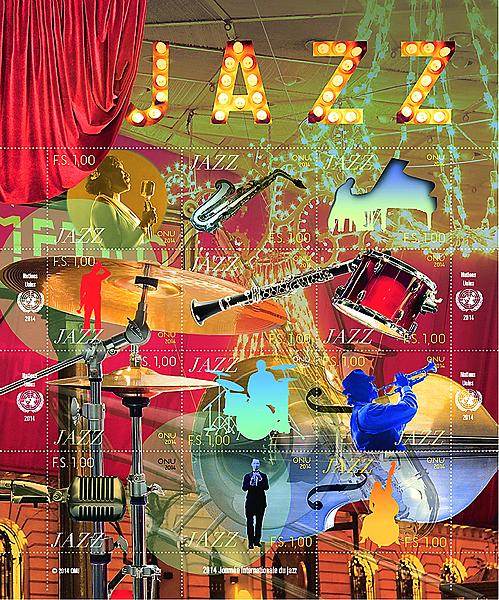 Figure 2. On this pane of 12 International Jazz Day stamps for use from the United Nations post office at the Palais des Nations in Geneva, Switzerland, the word “Jazz” is spelled out in marquee lights in the upper selvage. A red theater curtain also is shown in the upper left. 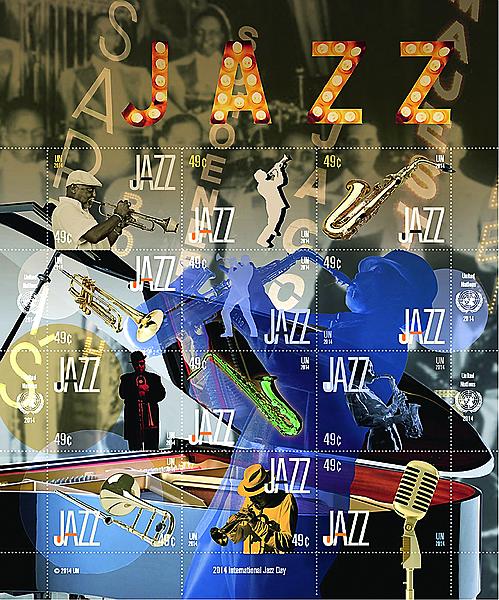 Figure 1. Sergio Baradat designed the United Nations Postal Administration’s International Jazz Day stamps to be issued April 30. The pane of 12 49¢ stamps for use from the post office at U.N. headquarters in New York City is shown.

The United Nations Postal Administration will celebrate International Jazz Day on 36 stamps and a souvenir card to be issued April 30.

However, information from the Westpex stamp show states the stamps will be sold at the show before the issue date. The show takes place April 25-27 in Burlingame, Calif.

According to the show website, www.westpex.com, a pre-launch ceremony for the stamps is scheduled for 10 a.m. April 25 in the Junior Ballroom Lobby of the San Francisco Airport Marriott Waterfront Hotel, 1800 Old Bayshore Highway, Burlingame.

The website says that the public may obtain these stamps only at the Westpex show prior to the April 30 official issue date.

The stamps are se-tenant (side-by-side) in three panes of 12, one for each of the UNPA post offices located at U.N. headquarters in New York City, the Palais des Nations in Geneva, Switzerland, and the Vienna International Center in Vienna, Austria.

The designs by Sergio Baradat of the United Nations capture the atmosphere of different types of jazz performances, showing singers, musicians, instruments, microphones and neon signs.

The word “Jazz” is written in capital letters in marquee lights in the upper selvage of each pane.

Some of the images are stretched across more than one stamp.

For example, on the U.N./New York 49¢ stamp pane pictured in Figure 1, a photograph of a saxophonist is shown on seven of the stamps. The image begins on the first stamp in the second row, showing the instrument’s bow and bell, and ends with the musician’s lower back on the last stamp.

Other images and photographs are superimposed on the saxophonist on six of the seven stamps.

Additional photographs are shown in the selvage of each pane.

Baradat said of the International Jazz Day stamps: “This was a wonderful project to work on. I approached it as a multi-faceted piece of art where each stamp is a collage onto itself, in tandem with the other pieces to create one large composition.

“I was inspired by the abstraction that is Jazz; I wanted to give the designs atmosphere and a sense of sound through colour.

“Along the way, I listened to old favourites: Chet Baker, Billie Holiday, Nina Simone, Duke Ellington and a host of others from the 1920s through 1950s.”

Although several stamps show photographs of real people, such as the 1fr stamp pictured in Figure 4, their identities are not known.

Baradat told Linn’s, “We used stock photos and do not have any information on the pictured musicians.”

Each stamp measures 40 millimeters by 30mm and is perforated gauge 13 by 13¼.

The cards are available either mint or canceled for a period of three months while supplies last.

Also, in conjunction with the International Jazz Day stamps, the UNPA is offering first-day covers with cancellations shaped like concert tickets.

UNESCO says that the day “is intended to raise awareness in the international community of the virtues of jazz as an educational tool, and a force for peace, unity, dialogue and enhanced cooperation among people.”

Each year, this international day brings together communities, schools, artists, historians, academics and jazz enthusiasts from around the world to celebrate and learn about the art of jazz, its roots, its future and its impact.

The 2014 International Jazz Day celebration will kick off in Osaka, Japan, April 30 with a daylong series of jazz education programs, performances and community outreach.

An American musical art form, jazz originated at the beginning of the 20th century. It is rooted in African traditions, draws from European musical forms, and has evolved into various styles across the globe.