2012 Waves of Color stamps not making waves on mail 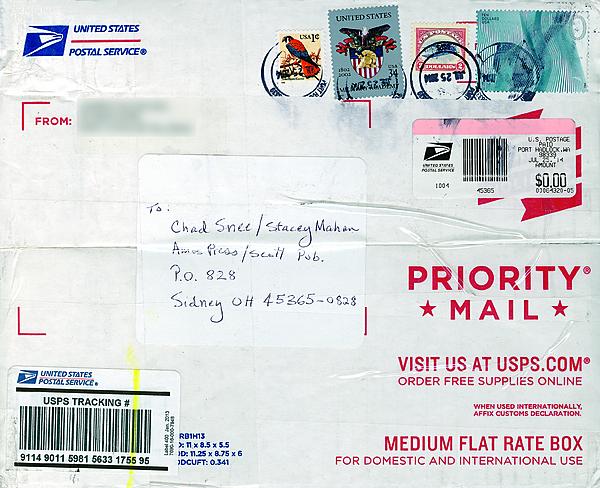 This Priority Mail box top is franked with a $10 Waves of Color stamp that satisfied most of the $12.35 postage required to mail the medium flat-rate box from Washington state to the Scott catalog headquarters in Sidney, Ohio. The item also bears three

Computer-generated wave patterns are featured as the central design on each of the stamps.

At the time they were issued, the general reaction among collectors was less than favorable.

I heard from more than a few collectors who questioned the somewhat nebulous nature of the artwork on the stamps.

Be that as it may, I rather like the stamps.

When I have the opportunity, I use Waves of Color stamps to mail heavier parcels to collector friends.

In most cases, the recipient is happy to return the parcel wrapper to me, thus providing a nice dollar-sign item for my collection.

Sometimes, though, it is hard to find the stamps at post offices in my area.

Thus far, the stamps don’t appear to see much use in the mail. The $2 and $5 stamps, in my experience, are most often encountered. The $10 stamp is used sparingly, and the $1 stamp rarely makes an appearance.

Once stocks of the $1 Wisdom stamp are depleted, it is likely that the $1 Waves of Color stamp will be pressed into great use.

Because of their high denominations, the Waves of Color stamps are typically used on heavier items or to pay associated postal fees such as registration or insurance.

One such use is illustrated here. This top of a medium flat-rate Priority Mail box shows a colorful franking comprising (from right to left) a $10 Waves of Color, a $2 Jenny Invert (Scott 4806a), a 34¢ U.S. Military Academy commemorative (3560) and 1¢ American Kestrel definitive (3031).

Postage totaling $12.35 was required to mail this box from Washington state to Scott Publishing Co. in Sidney, Ohio. Double-ring circular postmarks dated July 25 tie the stamps to the parcel.

Despite the long journey, none of the stamps was damaged. All in all, a keeper for the collection.