Circus souvenir sheetlet only in yearbook; extra-tall stamp on tap for Wilt Chamberlain 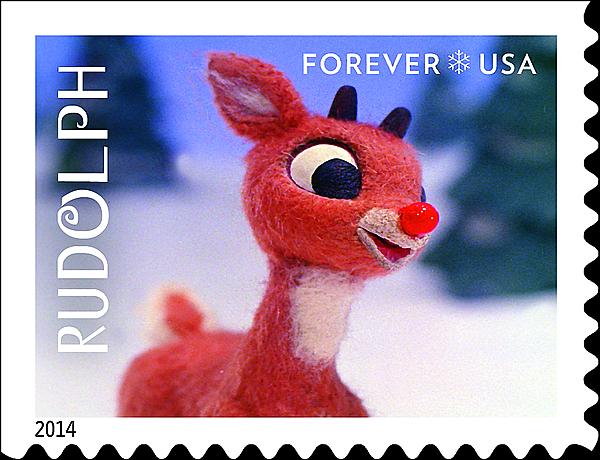 One of four Rudolph the Red-Nosed Reindeer forever stamps to be issued Nov. 5 or 6. 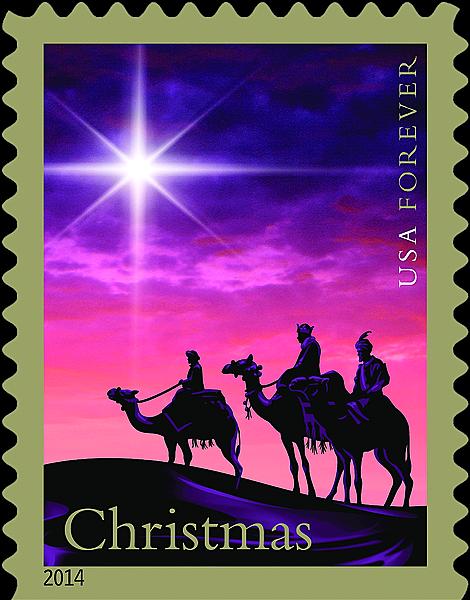 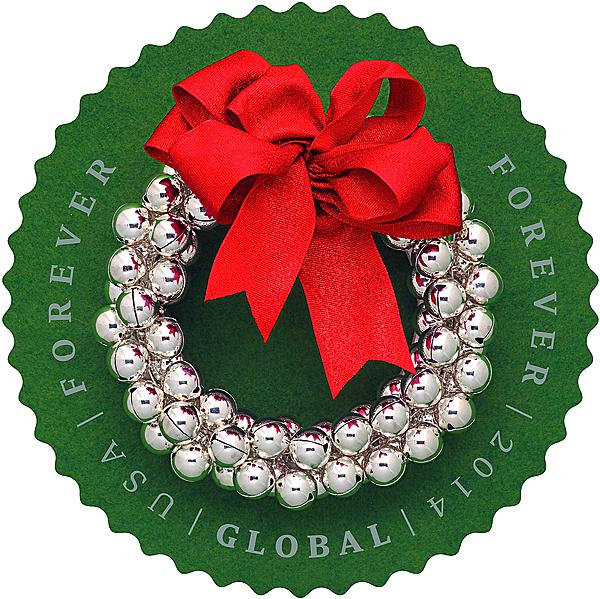 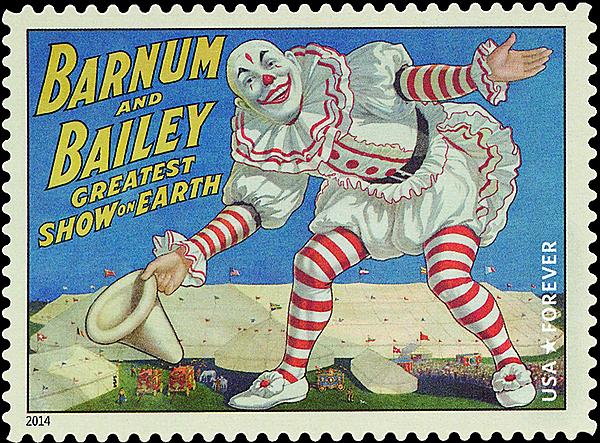 An alternate version of this Barnum and Bailey Clown Poster stamp from the 2014 Vintage Circus Posters set will be sold in a “souvenir sheetlet” available only in The 2014 Stamp Yearbook marketed by the United States Postal Service. 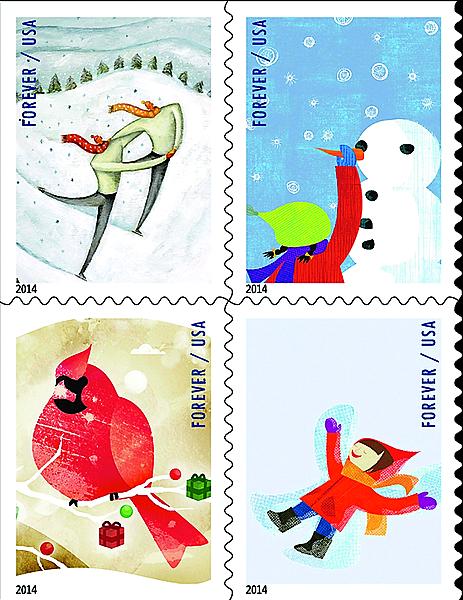 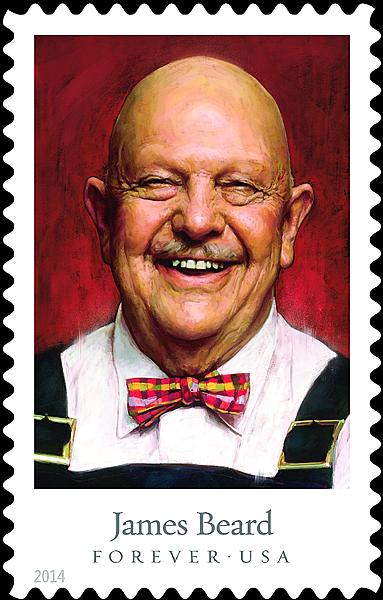 The United States Postal Service is creating a three-stamp “Circus souvenir sheetlet” that will be available in mint condition only with the purchase of the annual USPS stamp yearbook.

The sheetlet also will be offered canceled on first-day covers with a black ink or digital color postmark.

In addition, a 2014-dated version of the Breast Cancer Research semipostal will be issued in late September.

No official comment was given on any stamp to mark the 75th anniversary of comic-book crime fighter Batman, but it was indicated that one additional stamp issue for 2014 has not been announced.

A presentation of the 2015 U.S. stamp program is anticipated sometime in late October.

The Postal Service will begin accepting pre-orders for The 2014 Stamp Yearbook Sept. 1. The book typically consists of the commemorative stamp issues, stamp mounts and illustrated descriptions of the stamps issued throughout the year.

This year, the twist is the inclusion of a “Circus-themed sheetlet” that will be “ … available in mint form only within The 2014 Stamp Yearbook,” and canceled on USPS FDCs, according to the Postal Service.

The souvenir sheet will include “One $1.00 stamp, printed offset, showing an alternate version of the iconic clown poster featured on the 2014 Vintage Circus Posters pane.”

Pictured on page 1 is the Barnum and Bailey Clown Poster forever stamp (Scott 4898) issued May 5 as part of that eight-stamp set.

The sheetlet will also include “Two 50¢ Circus Wagon 1900s stamps, printed as intaglio, and reproduced from a 1990s die proof pulled from the Postal Service archives.”

The new sheetlet will also have a “die-cut selvage with decorative metallic ink border.”

The idea for the souvenir sheet was inspired by Australia Post, according to McGowan.

The price of the yearbook was not disclosed. The 2013 edition, including 87 stamps, is currently sold through the USPS online retail site for $64.95.

Orders for the new book will be accepted at the USPS website www.usps.com/stamps.

The Wilt Chamberlain commemorative is scheduled to be issued in December during a home game of the Philadelphia 76ers, with whom he won the NBA championship in 1967.

The Wilt Chamberlain stamp design was not revealed during the meeting, because it had just been approved days before.

Journalists were told that the stamp will not be a standard postage stamp size, that instead it will be an extra-tall commemorative stamp.

Five Celebrity Chefs stamps will debut Sept. 26 in Chicago, Ill. The Postal Service has only revealed the subject and design of one of the five forever stamps, honoring James Beard.

The other designs will be unveiled in the coming weeks on social media sites.

The stamps show ice skating, making snow angels, building snowmen, and bird watching (on a stamp that shows a cardinal).

The stamps will be issued in a double-sided pane of 20 (convertible booklet format).

Four Rudolph the Red-Nosed Reindeer forever stamps will be issued in a double-sided pane of 20 (convertible booklet format).

This year marks the 50th anniversary of the Rankin/Bass television production Rudolph the Red-Nosed Reindeer, which debuted Dec. 6, 1964.

Only one of the designs was shown at the Aug. 21 meeting. The other designs will be revealed through USPS social media sites leading up the stamp set’s first day.

The unveiled design depicts Rudolph; it is expected that other characters from the television special will be shown on the other three stamps.

A ceremony is planned for Nov. 5 or 6, possibly in New York City.

A Christmas Magi forever stamp will debut Nov. 19 in Washington, D.C. The stamp compliments the 2012 Holy Family forever stamp and shows the three wise men on the summit of a hill. A large star is depicted in the distance. The stamp was designed by Nancy Stahl, who also designed the Holy Family stamp.

A ceremony is planned for St. John’s Episcopal Church in Washington, D.C.

Five stamped envelopes with the theme of winter will be issued in late September. The imprinted stamps will be based on the Poinsettia stamp of 2013, the Bird-watching and Building Snowmen stamps from the forthcoming Winter Fun set, and two different imprints showing snowflakes from the 2013 Snowflakes nonprofit coil stamp set (Scott 4808-4812).

The designs of these No. 10-size stamped envelopes were not revealed.

The 12 Pioneers of Graphic Design stamps, previously announced as a 2014 issue, will not be issued this year, and are now planned for a future year.

The Linn’s 2014 U.S. Stamp Program on page 32 of this issue has been updated to include the newly revealed information.