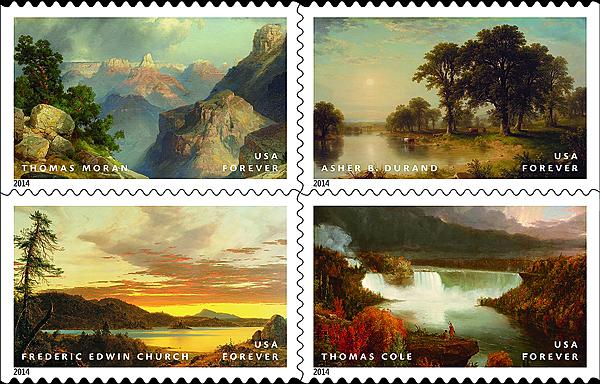 The nondenominated (49¢) Hudson River School forever stamps will be sold in a double-sided pane of 20, convertible booklet format.

The first-day ceremony will take place at 11 a.m. in Ballroom A of the Connecticut Convention Center, 100 Columbus Blvd., Hartford, Conn. The ceremony is open to the public.

“During the 19th century, the artists of a young America searched for a new way of viewing the world and found it in the very landscapes around them,” the Postal Service wrote in its description of the new stamps. “Inspired by the stunning natural beauty of New York state, the loose-knit Hudson River School of painters flourished from the mid-1830s to the mid-1870s and gave America its first major school of art.”

Cole, who at age 17 in 1818 emigrated with his family from England to the United States, is considered the founder of the Hudson River School for his role in inspiring other artists.

Along with the double-sided pane of 20, the Postal Service will sell Hudson River School stamp press sheets, both with and without the die cuts that normally separate individual stamps. Each press sheet consists of four panes and sells for $39.20. A total of 1,000 press sheets with die cuts and 1,500 without die cuts will be available.

Collectors requesting first-day cancels are encouraged to purchase their own stamps and affix them to envelopes. The first-day cover envelopes should be addressed for return (a removable label may be used), and mailed in a larger envelope addressed to Hudson River School Stamps, Hartford Post Office, MOWU, 141 Weston St., Hartford, CT 06101-9998. Requests for first-day cancels must be postmarked by Oct. 20.

The Postal Service’s uncacheted set of four first-day covers for the Hudson River School stamps is USPS item No. 689516 at $3.72.