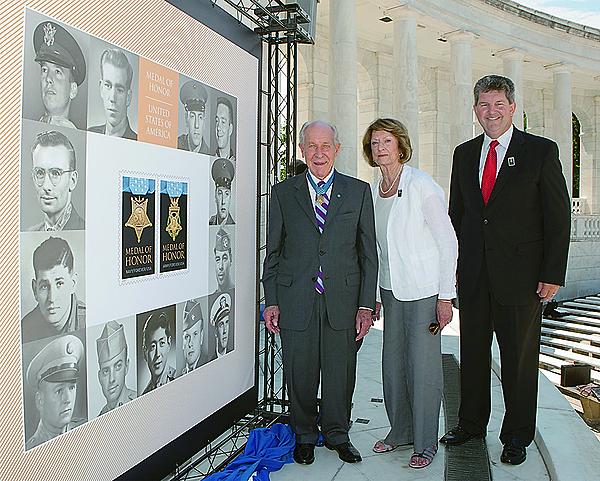 The United States Postal Service dedicated its Medal of Honor: Korean War forever stamps in a solemn ceremony at Arlington National Cemetery that almost resembled a joint stamp issue with the Republic of Korea.

That’s because the stamps were dedicated July 26, a day before the 61st anniversary of the end of the Korean conflict.

The anniversary brought a number of senior Korean officials to Washington, D.C., to attend the stamp ceremony and to salute the American veterans who saved their nation.

It was a ceremony filled with references to the “dynamic” alliance between the United States and South Korea. An Army band played both the U.S. and Korean anthems, with a U.S. honor guard carrying the Korean flag as well as Old Glory.

Korean politicians repeatedly praised the Americans who had served in the war, often bowing to the audience in grateful appreciation.

All it lacked was a Korean postage stamp to have made it a joint issue between the two allies.

The 145 American veterans who received the nation’s highest military honor during the Korean War are named in the new stamp folio that carries the images of the Army and Navy Medals of Honor on the stamps.

It wasn’t just those men that the Koreans were honoring, said Larry Kinard, president of the Korean War Veterans Association.

“All Korean veterans are heroes in the eyes of Koreans,” he told an audience of about 1,000.

One of the living Medal of Honor recipients, Thomas Jerome Hudner Jr. of Concord, Mass., was at the event in the Memorial Amphitheater. He receive a standing ovation when he was announced.

Kinard, a Texas native who served as an artillery forward observer during the Korean conflict, said he could not think about the fighting without recalling the actions of President Harry “Give ’em Hell” Truman, who made the unpopular decision to send U.S. forces to the Korean Peninsula to contest Communist forces attempting to control the nation.

“Without the president, there might not be a Samsung, a Hyundai automobile and all the industries that rose from the ashes,” Kinard said.

Korean officials echoed Kinard’s remarks and offered profuse thanks to the Americans who served in the conflict.

Two other Korean officials spoke at the event: Kim Jung Hoon, a representative of the National Assembly, and Vice Minister Choi Wan Keun, minister of patriot and veterans affairs.

Postmaster General Patrick Donahoe also spoke, calling it “very fitting” that the stamps were being dedicated at a memorial where many veterans of the conflict are buried.

He recalled that the great war writer Herman Wouk said the end of a war marks the beginnings of remembrance.

And the Postal Service, Donahoe said, is proud to be issuing stamps that reflect that remembrance.

Because Arlington National Cemetery is considered hallowed ground, the Postal Service said it was not allowed to sell or cancel the new stamps there.

The stamps and first-day cancellations were available at a nearby Arlington, Va., hotel where the Korean veterans were holding a convention.