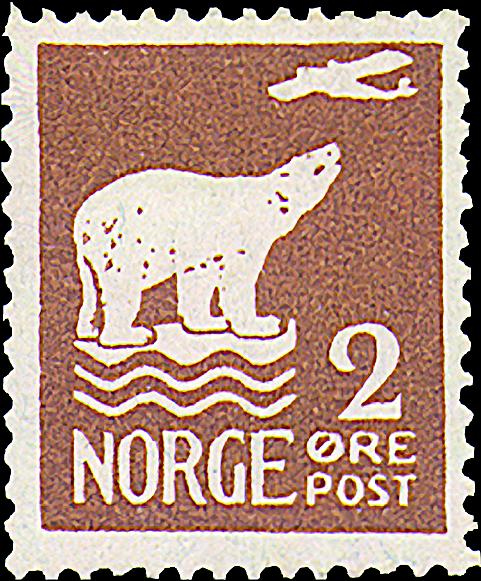 A polar bear design by a leading Norwegian artist was the subject of a set of seven stamps used in part to finance Roald Amundsen’s 1925 North Pole expedition.

The design of Norway Scott 104-110, depicting a polar bear atop a very small ice floe and gazing at an airplane overhead, seems sadly modern. It could be a contemporary bear hoping for air rescue, as the arctic ice beneath him has declined 50 percent since the middle of the 20th century, by many scientists’ calculations.

The seven-stamp set, however, dates to 1925, and was issued in part to raise funding for Roald Amundsen’s attempt to fly to the North Pole. It was not a semipostal issue (Norway’s first semipostal was in 1930), but a combination of regular postage and souvenir.

Amundsen (1872-1928), among the greatest of the great polar explorers, had traversed the Northwest Passage in 1906 and trekked to the South Pole in 1911. Convinced that further arctic exploring was best accomplished by air, Amundsen commissioned two flying boat planes in Italy, for use in trying to reach the North Pole in 1924.

The Norwegian government had promised to reward Amundsen and his South Pole crew with money but did not fulfill the promise. Never quite solvent, Amundsen was in dire financial straits in 1924, and perhaps the official decision to issue the stamps was rooted in some guilt over the unfulfilled promises after the 1911 expedition.

The original plan was to issue a single stamp, but the government decided that would be insufficient to raise enough money, and opted for a set of seven.

The set would be available as a regular postal issue, but most of the stamps would be sold as collectors’ items by the Norsk Luftseiladsforening (Norwegian Aero Society), under whose auspices the expedition was taking place.

The designer was Thorolf Holmboe (1866-1935), a famous Norwegian painter and illustrator, and the stamps were printed by Christian Knudsen & Co., the official Norwegian stamp printer since 1895.

The stamps were completed in the summer of 1924, but Amundsen’s shaky finances had reached a crisis point. In late June, the airplane factory in Pisa, Italy, refused to deliver the two aircraft until the £14,000 balance due was paid.

On June 25, Amundsen called off the trip, at least for that year. In September, he filed for bankruptcy, and sailed for America soon after, hoping that a lecture tour of the United States and Canada would generate $150,000 to build three new hydroplanes. The lecture tour was not going well, and the explorer was in despair when fate finally smiled.

Lincoln Ellsworth, the son of American financier-philanthropist James W. Ellsworth, called Amundsen and said that he wanted to join the next polar expedition. The senior Ellsworth gave Amundsen a check for $100,000 in January 1925, and Amundsen made plans for a flight to the North Pole in May.

Two Dornier seaplanes with Rolls-Royce engines would be built in Italy.

In February, Norway announced that a set of stamps would be issued to assist the expedition, and the polar bear set printed the previous summer was brought out of storage and issued on April 1, 1925.

At its February meeting, the Kristiana Filatelist Klub in Oslo condemned the issue as speculative and illegitimate.

Meeting in March, the group decided to contact the U.S. philatelic press and inform them that “there is no need at all” for the stamps, and that collectors should repudiate them. Mekeel’s Weekly Stamp News and the American Philatelist printed the Oslo club’s letter and agreed that the stamps were of “dubious origin.”

Thanks to the Ellsworth gift, Amundsen got his planes and supplies and took off from Spitsbergen May 21, 1925, heading for the pole.

Then, on June 18, Amundsen and all of his crew landed in Spitsbergen, exactly four weeks after takeoff.

They had successfully flown within 150 miles of the North Pole, and saw no land: useful information to add to the knowledge about the polar regions.

One of the expedition’s two planes had developed engine trouble on the day after takeoff and both planes landed in open water, only to become iced in. After days of herculean efforts, the crew freed one plane and managed to fly out with all aboard.

Congratulations poured in from around the world, and Norway welcomed the adventurers with rejoicing, but not everyone was impressed.

The June 1925 issue of Scott’s Monthly Journal quoted the Oslo stamp club’s letter of protest, and the unnamed author added: “Issues that are unblushingly made for the purpose of raising money for some scheme — North Pole flights, Costa Rican athletic games, Portuguese monuments and such — are a disgrace to governments that foster them and blots on stamp collections. Unfortunately, these miserable things are available for postage … We have seen some of these North Pole stamps used in part payment of postage on letters, so we feel compelled to list them [in the Scott catalog], though we thoroughly disapprove of them.”

In the January 1926 issue of the Collectors Club Philatelist, Harry L. Lindquist quoted a notice dated Oct. 21, 1925, from the Norwegian post office department, which asserted that the stamps were ordinary stamps sold at post offices throughout Norway as well as to the Norwegian Aero Society, were usable for both domestic and foreign mail, and had the same watermark and paper as the country’s other stamps, concluding, “There is no reason to dispute the postal character of the Pole stamps.”

I am grateful to Norway expert J.J. Henry of Pennsylvania for providing vital data about this set of stamps.