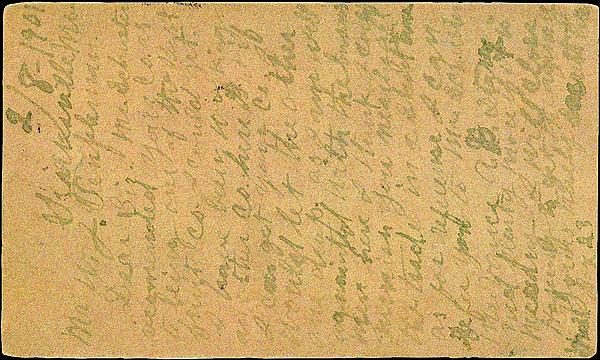 A handwritten message on the back of the postal card proposes that the sender serve as an agent representing the fruit business of the addressee. 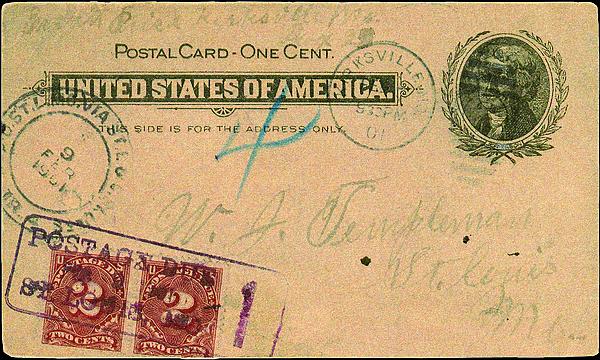 The postal card is addressed to a W.J. Templeman in St. Louis, Mo., with a return address for Everett Price in Kirksville.

There is a large blue manuscript “4” in the center of the postal card, and an additional postmark reading “R.P.O. ST. L, VIA ST. L & C. BLUFFS, TR4,” indicating handling by the St. Louis railway post office.

Coupled with those postal markings are two 1895 2¢ deep claret postage due stamps (Scott J39). These are postmarked with a large magenta boxed postal marking that reads, “POSTAGE DUE, FEB. 9, 1901, ST. LOUIS, MO,” with a large numeral “1” at far right within the marking.

Why would a simple 1¢ postal card traveling roughly 200 miles be assessed 4¢ postage due?

The handwritten message on the reverse of the postal card, dated Feb. 8, reveals that Price hoped to serve as an agent representing Templeman in a fruit business.

Dear Sir. Mr. Schuster recommended you as to being one of the Best Fruit Co. I could get. I have been working another Co. here. But if I can get your Co. I would let the other one drop, as I am well acquainted with the business men here I could furnish you nearly all the trade in a short time. As for reference I can refer you to Mr. Schuster, Mr. Vance, A.G. Stary and plenty more if it is necessary. I will close hoping to get the agency.

The large handwritten “4” on the front of the card was placed directly in the center, evidently to make sure that 4¢ in postage due stamps were affixed.

Where and when did the large blue manuscript “4” originate on the 1¢ postal card? Was it before or after the St. Louis and Council Bluffs R.P.O. clerk handled the postal card? If it was applied by the clerk, what is the reason?

It might have been marked as a separate item by a postal clerk in the St. Louis post office after the postal card traveled on the R.P.O.

But why would a domestic 1¢ postal card be charged 4¢ postage due?

The St. Louis post office affixed the two 2¢ postage due stamps and postmarked them with the beautiful magenta boxed postage due cancel.

The message on the back of the postal card suggests that Templeman was operating a fruit commission business with agencies in other cities.

Could it be that the incoming mail for one delivery had a total postage due of 4¢? If so, Templeman’s 1¢ card might have been on the top of a stack of mail, and served as a useful item onto which the two 2¢ postage due stamps could be affixed, representing the amount due for more than just the single card.

It seems likely, then, that the 1¢ postal card was an early “top of the stack” application of postage due.

There is a closed spindle hole within the R.P.O. postmark, perhaps indicating that the postal card was set aside for accounting purposes by spindling it and recording it as 4¢ postage due for business records.

I wonder if Price was successful in his effort to be an agent for Templeman, since he used only a 1¢ postal card to mail his proposal?

The postal card has been preserved for more than a century. Perhaps someday the questions it raises will be answered.